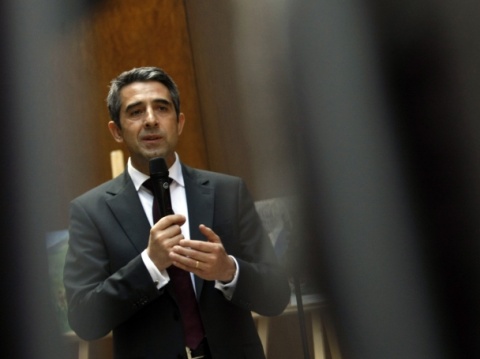 Bulgaria's President, Rosen Plevneliev, insists the recent decision of the Supreme Judicial Council to fire a senior judge is unfounded and biased. Photo by BGNES

Bulgaria's President, Rosen Plevneliev, is standing firm behind his position that the Supreme Judicial Council, VSS, made a blunder with the decision to dismiss Miroslava Todorova, Chair of the Bulgarian Judges Association, BJA, and Judge at the Sofia City Court.

Plevneliev, who is on a visit to the eastern city of Dobrich, made the comment in connection with earlier statements of Prime Minister and Interior Minister, Tsvetan Tsvetanov, voicing disbelief that the President has sided with a judge with 50 delayed Court cases.

On Sunday, the President stated that VSS has made a blunder that reverberated negatively across the country all the way to Brussels.

Speaking in an interview for the Bulgarian National Television, BNT, Monday, Tsvetanov said Plevneliev, most likely, did not know the details in the case and this is why he made such wrong statements. He added that such opinion does not belong to a democratic State.

"My position remains unchanged. I continue to insist that the VSS decision is unfounded and biased, and left serious doubt that this is not a systematic, but individual approach, aiming at punishing an individual with a strong civil position, who on top of it, is suing the Interior Minister," said the President.

He noted that it was high time for the Bulgarian judiciary to realize it is been watched in the country and abroad and prove that it is objective, effective, trustworthy and independent of political parties.

"If we elect quality people in the new VSS in the fall and establish clear and transparent rules, we will certainly have a well-functioning body. But, no matter what legislation we have and alter, if people who are politically dependent end up being VSS members again, than we will not have the result we all want and expect. In the next two months, politicians must first and foremost support a transparent procedure to elect the best, the most-dignified and qualified," Plevneliev stressed.