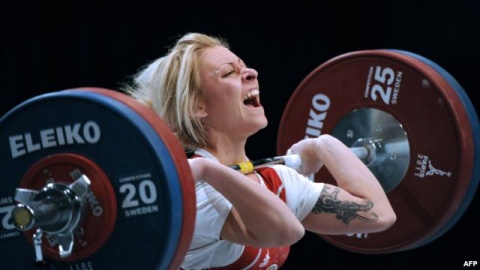 Bulgarian-born weightlifter Boyanka Kostova caused an international squabble when she decided to represent Azerbaijan at the 2012 Olympics. Photo by Radio Free Europe

Changing passports to compete for another country has long been common practice among athletes. But as the Olympic Games prepare to kick off in London, the growing incidence of nationality switches is raising eyebrows.

Olympic host Britain, in particular, has come under scrutiny this year for recruiting an unprecedented number of foreign-born athletes.

These include Yamile Aldama, a triple jumper from Cuba who competed for Sudan at the 2004 Olympics, long jumper Shara Proctor, who was born in Anguilla, and German-born cyclist Philip Hindes. The British team also includes three U.S.-born athletes: 400-meter runners Michael Bingham and Shana Cox and 100-meter hurdler Tiffany Porter.

Critics have dubbed the athletes "plastic Brits" -- but the practice is widespread in other countries as well.

A number of former Soviet countries, spearheaded by oil-rich Azerbaijan, have actively adopted the practice.

Of the more than 50 athletes who will represent Azerbaijan in London, almost half are naturalized citizens.

In the run-up to the Games, the South Caucasus country became embroiled in a bitter dispute involving two teenage Bulgarian weightlifters.

But Bulgaria demanded an additional fee when it became clear the duo would represent Azerbaijan at the 2012 Olympics, saying the original agreement did not allow for this and threatening to block their participation.

After months of squabbling, Bulgaria eventually gave in and agreed to let Kostova and Valentin lift for Azerbaijan in London.

While naturalizing foreign athletes has proved an effective way of raising one's profile on the international sports scene, some fans are wary of the practice. Many say it contributes to the commercialization of sports and they claim to feel no emotional connection with "imported" athletes.

In comments in March, International Olympic Committee President Jacques Rogge maintained that some athletes had legitimate motives for changing nationalities, including family reasons or a lack of financial support in their native countries.

But some, he added, are only seeking to cash in on the Olympics.

"I have reservations in some cases where athletes who obviously don't lack any support emanating from their local sporting and government authorities still change nationality," he said, "We cannot oppose it because it's a sovereignty matter, but let me tell you very frankly: I don't love that."

Like Azerbaijan, Kazakhstan is another post-Soviet country that increasingly relies on foreign-born athletes.

??Moreover, as many as four Chinese-born weightlifters will also compete for Kazakhstan at the London Olympics: Maya Maneza, Zulfiya Chinshanlo, Arli Chontai and Farkhad Kharki. All four have taken up Kazakh-sounding names along with Kazakh citizenship.

The lifters have already distinguished themselves at international competitions and Kazakhstan hopes they will snatch more victories in London.

According to Mendikhan Tapsiruly, the coach for Kazakhstan's national heavy athletics team, the foreign-born athletes are also helping popularize sports that are still relatively new in the Central Asian nation:

"We brought in these Chinese athletes to raise the competition level inside Kazakhstan," he said.

"They will encourage our youths to start practicing heavy athletics. Many young Kazaks took up heavy athletics following the victories of Maya Maneza and Zulfiya Chinshanlo.

"The last two Chinese athletes to come here, Arli Chontai and Farkhad Kharki, are also very strong. They are both capable of winning medals at the London Olympics."

A Source Of Resentment

Not all Kazakhs, however, are thrilled. Instead of spending its money on foreign recruits, many say Kazakhstan, should focus on training young Kazakh athletes and developing sporting facilities in the country.

Some also feel that Kazakhstan should be represented by athletes who were born and raised there.

"Even if Chontai and Kharki win gold medals, the fans will not recognize their victory, because they are foreigners to us," said Kazakh sports journalist Rauan Okas.

"Plastic" athletes are also causing resentment in cash-strapped nations that are seeing their best sporting hopes defect to wealthier countries.

The talented hammer-thrower Sukhrob Khodzhaev, for instance, caused a stir in his native Tajikistan when he unexpectedly switched over to Uzbekistan three years ago.

Tajikistan, which had planned to send Khodzhaev to the 2010 Youth Olympic Games in Singapore, was outraged after learning that he intended to represent Uzbekistan at the competition.

Following almost a year of negotiations, it was agreed that Khodzhaev would not attend the Singapore Games at all -- although he will compete for Uzbekistan in London.

Nargis Nabieva, the head of the sports department at Tajikistan's Committee on Youth Affairs, told RFE/RL that the Uzbek Olympic Committee had sent a letter which said "Sukhrob had become an Uzbek citizen of his own accord."

Nabieva added that the athlete's family had been complaining about his salary in Tajikistan.

Some sports stars, however, have gone against the trend and turned down lucrative contracts involving nationality switches.

Kosovo's judoka Majlinda Kelmendi is one of them.

Kelmendi, the only Kosovar athlete who will compete in London, turned down an offer to represent Azerbaijan at the Games.

She will represent Albania instead after the International Olympic Committee squashed her bid to compete under Kosovo's flag.