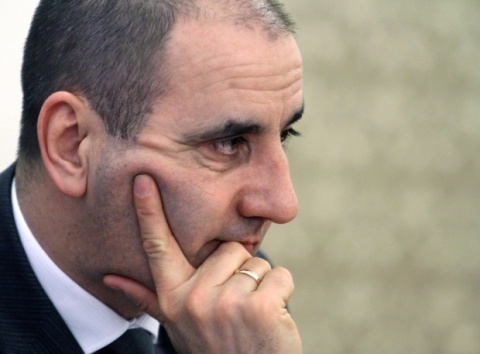 Tsvetanov's comments were related to the controversial decision of VSS to dismiss Miroslava Todorova, Chair of the Bulgarian Judges Association, BJA, and Judge at the Sofia City Court.

On Sunday, the President stated that VSS has made a blunder that reverberated negatively across the country all the way to Brussels.

Speaking in an interview for the Bulgarian National Television, BNT, Monday, Tsvetanov said Plevneliev, most likely, did not know the details in the case and this is why he made such wrong statements.

He added that such opinion does not belong to a democratic State.

In the Monday interview, Tsvetanov downplayed the protest by saying that the demonstrators have been mostly citizens and lawyers from some "unknown law offices," not judges. He stressed it was a politically motivated rally.

"I trust Bulgaria has a number of honest magistrates, but they are forced to keep silent. If everyone adheres to principles, we will have an excellent justice system. The judiciary is independent and must remain such, but not when everyone wants to preserve the Status Quo and the impunity," said Tsvetanov.

He stressed the government of his ruling Citizens for European Development of Bulgaria party, GERB, is leading a battle against organized crime and those who wish to maintain the said Status Quo.

Tsvetanov firmly rejected claims that he is behind Todorova's ousting and explained he learned of her existence and began criticizing her only after people victimized by crime turned to him to complain about her.

Regarding the upcoming EC report and expectations it will be very harsh, the Minister stated Bulgaria wants justice that would defend public interest.

"The State will prevail over those who see themselves as untouchables. I hope the report will be fair and objective. We applied maximum effort and I expect good marks," Tsvetanov concluded, pointing out he had not seen the draft report which was sent to Bulgaria Sunday evening.