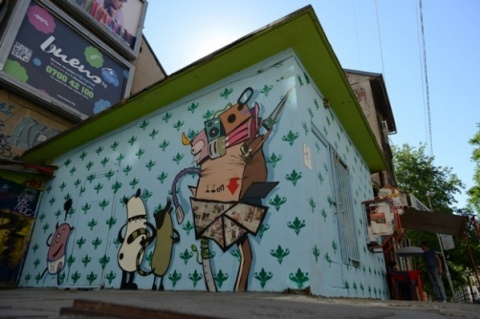 The Urban Creatures festival in Bulgaria's capital Sofia has the goal to highlight some of the most talented street artists in the country as well as the graffiti as a true art form. Photo by gong.bg

The heat wave that overcame Bulgaria over the weekend did not scare enthusiastic graffiti artists or prevent their participation in the Urban Creatures Fest, organized over the weekend by the City Hall.

The fest is being held outdoors in the stone-covered bed of the Perlovska river neat the Georgi Asparuhov stadium. It takes place between 10 am and 1 pm, and 5 pm and midnight, to avoid the strongest heat.

Some of the most popular graffiti artists are included in Urban Creatures such as Nasimo, Bozko, Funne, Sten Duc, 140 ideas, Esteo, Goat, Trash lovers, and Ndoe, who is also a known rapper.

Urban Creatures is organized with the assistance of the Urban Art Foundation with the goal to highlight some of the most talented street artists in the country as well as the graffiti as a true art form.

The Mayor of Sofia, Yordanka Fandakova, visited the fest Sunday. Impressed by the artwork, she appealed to the participants to paint the trash containers on the streets to make them better looking.