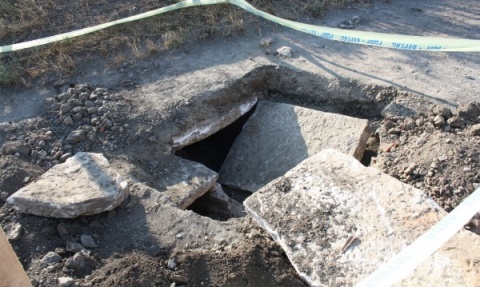 Two gold necklaces have already been found in the recently discovered Roman tombs in Debelt, in southeastern Bulgaria.

The news was reported Sunday by the Bulgarian Standard daily.

The archaeological team began research of the tombs last week. The two Roman tombs emerged at the beginning of the month after a truck carrying concrete for a construction site near the village of Debelt in the Strandzha mountain caused the precious discovery.

The truck was on a dirt road near the main one between the Black Sea city of Burgas and Sredets. The road caved in under its weight and uncovered the marble plates of a Roman tomb, most likely dating from the 2nd-3rd century A.C. Another tomb was discovered nearby in the aftermath.

The archaeologists say the finds, mostly from very rich burials, have already exceeded their expectations. A skeleton of a man buried with clothes weaved with gold treat and beads is part of these finds. Because of the clothes and the bronze embalming vessel discovered beside the skeleton, they think this was someone wealthy and from the gentility.

Another skeleton, believed to be of a woman, was found nearby, along with the two priceless and well-preserved gold necklaces.

The necklaces are decorated with semiprecious stones and have two images – of the mythical creature Basilisk and of the official sun god of the later Roman Empire Sol Invictus (Invincible Sun). They further have some inscriptions, whose decoding is forthcoming.

Archaeologist, Krasimira Kostova, notes that the woman has been a member of the religious society of the Gnostics and for this reasons the gold necklaces were placed inside her tomb – with the belief that they bore a strong defending force.

The other finds include a gold pendant, and 2 bronze coins. These are the first discoveries in Debelt, associated with the Gnostic movement, which flourished precisely during the 2nd and 3rd centuries A.C.

"Debelt is one of the key archaeological sites in Bulgaria. This is a Roman city, a colony of the highest level, meaning it is a direct copy of the organization and planning of Ancient Rome. It has been founded in year 70 A.C. by retired Roman legionnaires," Director of the National History Museum at the Bulgarian Academy of Sciences, BAS, Lyudmil Vagalinski explains.