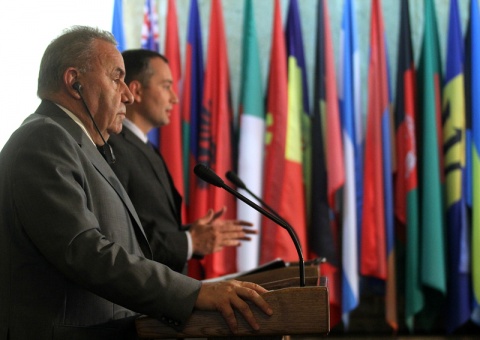 Bulgaria and Romania are to launch two new border crossings in the region of Dobruja, the Foreign Ministers of the two countries revealed on Friday.

"Bulgaria and Romania are showing that EU enlargement's effect is only positive," Bulgarian Foreign Minsiter declared during joint press conference with his Romanian counterpart Andrei Marga in Sofia.

Mladenov reminded that the trade turnover between the two countries has now grown to EUR 3.5 B, while the number of Romanian tourists who visited Bulgaria in 2011 reached 960 000.

"Two new border checkpoints will be opened in Dobruja, which will expand opportunities for our citizens to trade, travel and develop their relations." he stated.

The two ministers discussed the timely finalization of the construction of Danube Bridge 2 and the prospect of starting a study to build a second bridge near Rousse-Giurgiu. The Romanian government is willing to commit to reducing or eliminating taxes on the bridge at Rousse.

Marga said that Romania was interested in a high-speed motorway that Bulgaria, Turkey and Qatar are to build being extended into Romania.

The ministers discussed the upcoming reports within the Co-operation and Verification Mechanism and the expected decision in September on accession to Schengen. "All countries must be assessed on the basis of their achievements. At the same time, we must realise that we live in an increasingly connected world, in which whatever a country does, there are global political consequences," Minister Mladenov said.