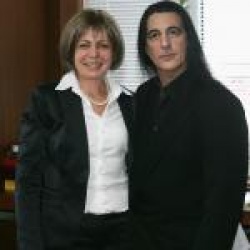 Manowar bass player and songwriter Joey DeMaio has endorsed the campaign for the adoption of stray dogs launched in Bulgaria's capital Sofia.

On Friday, DeMaio and Sofia Mayor Yordanka Fandakova visited the Seslavtsi dog shelter in the capital.

"There are stray dogs all over the world, but it is important that you have been taking measures to tackle the problem," DeMaio told Fandakova, as cited by the Bulgarian Telegraph Agency.

Fandakova has been widely criticized over what is perceived as her incompetence in dealing with Sofia's stray dogs population.

The Mayor claimed that her municipality's campaign aims at "the real adoption of animals" instead of letting them back on the streets.

Two elderly men have been killed by aggressive stray dogs in the Bulgarian capital since the beginning of 2012.