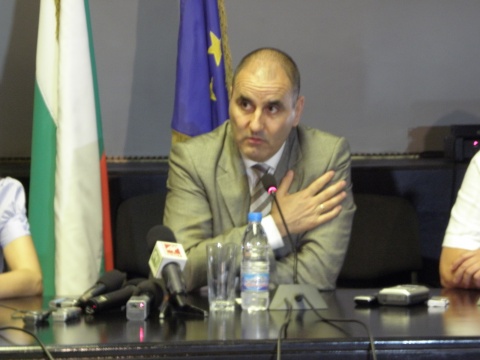 Interior Minister Tsvetan Tsvetanov presented Friday statistics on the fight against human trafficking in Bulgaria in 2011. Photo by BGNES

Human trafficking victims in Bulgaria were 550 in 2011 and the country is still considered an exporter of human trafficking, according to Interior Minister Tsvetan Tsvetanov.

Tsvetanov told journalists Friday that the optimized National Committee for Combating Fighting Human Trafficking had led to an increased efficiency all institutions operating in the sphere,

He explained that all resolutions adopted by the European Parliament and the European Commission in the sphere automatically turned into a commitment for each EU member state.

Tsvetanov noted that Bulgaria had managed to develop a number of excellent strategic papers, citing as an example a national mechanism and a national strategy for combating human trafficking adopted as a result of the country's cooperation with the Netherlands.

He made clear that the aim was to achieve a very strong partnership with local authorities, with seven local committees already established on the territory of the country and an eight one underway.

The Interior Minister emphasized the role of prevention in fighting human trafficking, adding that the Interior was working on projects involving risk groups.

He also underscored the importance of the support of the NGO sector in the sphere.