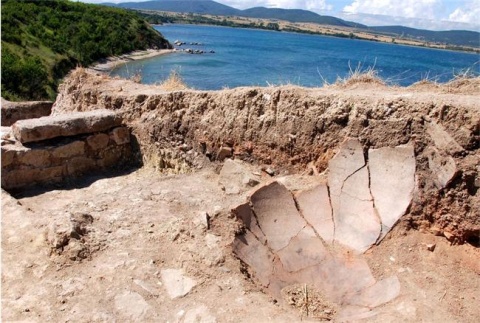 Bulgarian archaeologists have found a unique for the Bulgarian Black Sea coast underwater district with remnants from an early Byzantine fortress. Photo by Elena Foteva for 24 Chassa.

A Bulgarian Herculaneum, named Akra, has been discovered by archaeologists on the Akin cape, near the town of Chernomorets on the southern Black Sea coast.

The information was reported by the Director of the National History Museum, NIM, Bozhidar Dimitrov, speaking in an exclusive interview for the online edition of the Bulgarian 24 Chassa (24 Hours) daily.

The historian says that the settlement had been destroyed by an Avar invasion.

Ivan Hristov, who leads the archaeological team and is a Deputy of Dimitrov, is continuing excavations on the cape, where a unique for the Bulgarian Black Sea coast underwater district with remnants from an early Byzantine fortress have been found. The fortress, initially believed to be named Krimna, dates from the end of the 5th century A.C.

According to Hristov, the fire set by the Avars, in some way sealed the finds into the earth, similarly to the lava from Vesuvius sealing Pompeii. The heavy tile roofs collapsed preserving everything underneath.

Dimitrov told 24 Chassa that the finds included several fully preserved vessels, clay amphorae, lamps, gorgeous tiny glass cups, along with a number of ceramic fragments, which will be restored. The items were made at the time by craftsmen in northern Africa and then taken to Akin by ships.

The NIM Director further reiterates that after taking a thorough look at the finds and digging deeply into archives, he realized that this has been a city very similar to the Italian Herculaneum in the way it has been preserved, and that he was inclined to change his initial belief the city was named Krimna.

"Most likely it was the same as now – Akra. In ancient Greek Akra means cape but also a fortress and a citadel. Many historical documents confirm it; there was such large city," says he.

The team is currently working in the southern part of the fortress, where, as Hristov reports, a large number of finds had been discovered in a small area because the construction had been very dense.

"We are studying now a third house and we see already something like a residential district behind the fortress walls, with large homes with stone foundations," the archaeologist explains.

The team has also found four large bronze coins with the portrait of Emperor Justinian the Great, showing that the fortress was built during the reign of Emperor Anastasius about year 513, and was later reinforced by Justinian.

The excavations on cape Akin are under the patronage of NIM in partnership with the Archaeology Institute at the Bulgarian Academy of Sciences, BAS, and the History Museum in Burgas, and are financed by the Via Pontica program for which Finance Minister, Simeon Djankov, slated funds. Students from the Sofia University are taking part in the digs.

Hristov and his team demand a ban on all construction in the area in order to preserve the precious discoveries.

The terrains west from Chernomorets are still untouched by construction, and very picturesque, but private individuals have claimed already ownership on the lands.