Owner, Manager of Sofia-based Hotel Busted with 170 kg of Cocaine 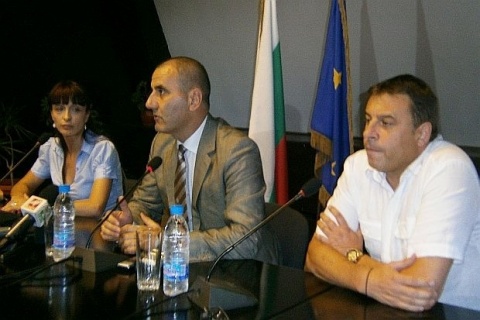 Interior Minister Tsvetan Tsvetanov (middle) presented details about the international police operation at a press conference on Thursday in Blagoevgrad. Photo by dariknews.bg

The owner of the Rodina hotel in Sofia, Vasil Ninov, and the manager of the facility, Konstantin Georgiev, have been arrested in Greece for attempting to smuggle nearly 170 kg of cocaine.

Bulgaria's Interior Minister Tsvetan Tsveranov explained Thursday that the two Bulgarians had been arrested Wednesday, alongside a Spanish citizen and a Portuguese national at the Port of Thessaloniki.

The arrests were made after a joint operation of Greek and Bulgarian police forces and the US Drug Enforcement Administration (DEA).

Vasil Ninov was one of the main shareholders in the Balkan Universal Bank, which went bankrupt at the end of the 90s, according to reports of TV station bTV.

The investigation of the bankruptcy of the Balkan Universal Bank revealed that it had depived the state budget of tens of millions of leva.

Tsvetanov emphasized that Ninov had been very active politically.

According to the Kathimerini newspaper, the shipment of cocaine had been earmarked for the Greek market and had been imported from Latin America.

Initial estimates of the shipments' value point to some EUR 15 M.