Bulgaria: PM Boyko Invites Creators of "Boykometer" for a Chat 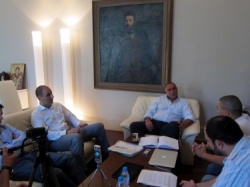 PM Borisov (M) together with the Interior Minister (L) during their meeting with bloggers Asen Genov and Komitata (R). Photo by Asen Genov

A few days ago, the web site Politikat.net, created by prominent Bulgarian bloggers Komitata (Konstantin Pavlov) and Asen Genov, became the subject of the government's attention.

Politikat.net is an Open Source platform that tracks how promises made by the government and PM Boyko Borisov are being fulfilled (or not fulfilled). It includes a special section called "Boykometer," inspired by the US website Obameter.

On July 6, the press center of the ruling party GERB sent a letter to Komitata and Genov, asking them to provide statistics and resources used by Politikat.net.

The government, led by Boyko Borisov, is facing criticism and accusations of pressure on the Bulgarian media. According to a report of the Bulgarian Helsinki Committee, there is a "disturbing situation" with the freedom of speech in Bulgaria. The Bulgarian branch of the Association of European Journalists writes that "corporate journalism dominates Bulgarian media sector."

After sending the letter, PM Borisov invited Genov and Pavlov to "discuss" Politikat.net and his "promises" to the people. It was disturbing that the Interior Minister also attended the meeting.

In 2011-2012, Bulgaria dropped dramatically - from the 70th to the 80th place - in the world press freedom rankings of Reporters Without Borders. The country ranks last among other EU states, sharing the same index with Serbia, Chile and Paraguay.

On July 7, The Economist published an article, in which the situation with the freedom of speech in Bulgaria was described this way:

[...] Mainstream newspapers are owned by banks or powerful companies. There is little investigative reporting. Advertising by the government and by state-owned companies is a big source of revenue for newspapers; because of that, self-censorship is the order of the day. [...]