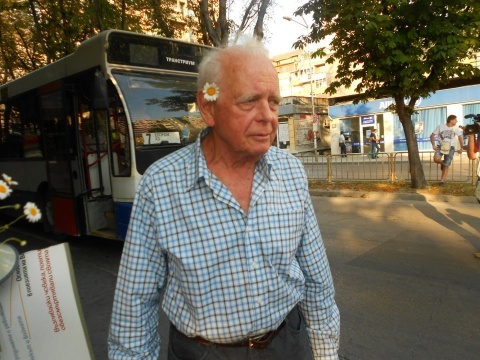 Former Foreign Minister and career diplomat Ivan Stanchov, also popular in Varna by his charitable activities for disabled children at the protest rally against construction in the city's Sea Garden. Photo by Facebook

The headline news that the general urban plan (OUP) of the Black Sea City of Varna will ban construction in the local top landmark, the beautiful Sea Garden, might be overrated.

The suspicion is voiced by architect Kalina Pavlova from the Public Center for Environment and Public Development, one of the forerunners of those opposing the Alley One project.

One week ago, under strong public pressure, at a dramatic session, the Varna municipal council banned construction in the park, but the thorny issue with the so-called Alley One remained unresolved.

The project is part of development plans of "Holding Varna", a company related to locally all-powerful shady TIM consortium.

"For some particular parts of the Sea Garden and Alley One some samples of the detailed urban plan are already effective. The plan was prepared in 2002 under a request of "Consortium Alley One," which includes the beach concessionaires and the Municipal Council. The said samples are effective and cannot be halted for an unlimited period of time by construction bans, recently issued in connection with the new OUP, whose draft was passed last Wednesday," Pavlova insists.

She explains that each land plot in the Sea Garden which has such sample plan or there is a procedure for its preparation can be built without restrictions despite the fact the new OUP marks the entire territory as a park.

"The 2002 detailed urban plan has been becoming effective "by the piece," leading to the said sample plans for each land plot and Alley One and to the appearance of a number of public buildings, which in reality turned out to be apartment ones," says the architect.

The Bulgarian Dnevnik daily writes that Pavlova's claims were confirmed indirectly Monday during the visit in Varna of Deputy Regional Minister, Lidiya Stankova, who has pointed out that the Act for Planning of the Territory gives local mayors the authority to impose construction bans in connection with the preparation of new detailed urban plans. The latter, however, are effective only for two years and can be extended only by one year and only with the signed order of the Regional Minister.

Varna Mayor, Kiril Yordanov, banned construction in the Sea Garden as early as 2006, but the ban expired in 2009. According to experts, cited by Dnevnik, a new ban cannot not be imposed, which makes the news that after consultations with Prime Minister, Boyko Borisov, and the Regional Ministry, a decision has been made to not allow future construction in the park useless.

The architect stresses that if the local administration has a sincere desire to protect the Sea Garden, they must assign the preparation of a new detailed urban plan ASAP and then quickly expropriate the affected private properties, including those which already have sample plans.

In addition, Yordanov must act fast to designate the park as an area for public use, otherwise, under current legislation, determining the deadlines, the City Hall will be forced to reinstate property to private individuals. Pavlova explains that such detailed urban plan can be prepared under the guidelines of the one dating from 1982.

The construction ban last week was imposed under strong public pressure, in the aftermath of mass protest rallies.