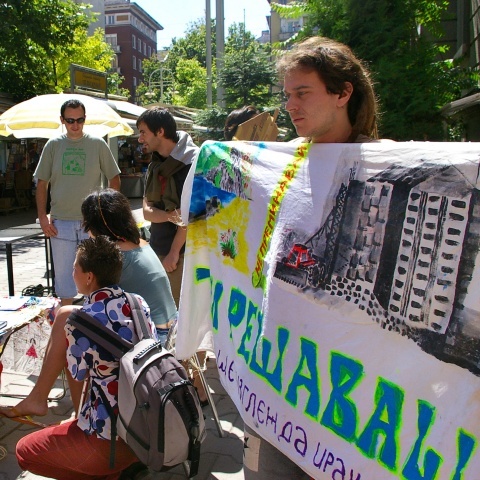 Environmental activists are pictured in 2006 collecting signatures against resort construction at the Irakli beach, a battle that has dragged on for six years. Photo by Sofia Photo Agency

Bulgaria's Supreme Administrative Court (VAS) has conclusively declared illegal the initial stages of construction of a resort complex in the Irakli-Emine protected area on the Black Sea coast.

A decision of VAS dated July 6, 2012 upholds the decision of the Burgas Administrative Court from September 2011 cancelling the illegal permit issued by Burgas Regional Environment and Waters Inspectorate to offshore investor Swiss Properties for the construction of the Riverside Village complex.

The decision of VAS is final and cannot be appealed, which means that the illegal construction must be removed and the area must be recultivated.

VAS upholds the ruling of the Burgas Administrative Court that the EIA assessment of the scheme was flawed, taking into account the environmental impact of separate buildings rather than the project in its entirety.

In 2008, the environmental authorities in Burgas granted permission to Swiss Properties for the construction of a resort complex called Riverside Village on the Vaya River, near the Irakli beach not far from Cape Emine.

The Burgas Regional Environment and Waters Inspectorate argued that the project would not have a negative impact on the Emine-Irakli area, which is part of the European protected areas network NATURA 2000.

The approval of the Riverside Village project granted by the regional office of the environmental watchdog was appealed by the Bulgarian branch of the World Wildlife Fund.