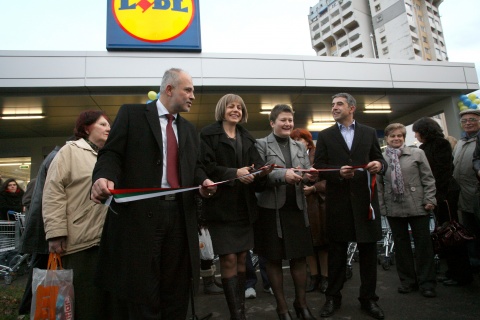 Lidl opened its first fourteen stores in Bulgaria at the end of November 2010, locating them in eleven cities. Pictured here the ribbon-cutting ceremony in the capital Sofia. Photo by BGNES

German discount retailer Lidl said it has expanded its chain in Bulgaria, a move that will heat up further the competition in the sector.

The new shops are located in the capital Sofia and the cities of Burgas, Ruse, Stara Zagora and Vratsa, bringing the total number of Lidl outlets across the country up to sixty.

At the beginning of 2010 German retailer Tengelmann sold its discount retail chains in Romania and Bulgaria to its rival Lidl, which is part of Germany's Schwarz retail group.

Tengelmann, the parent company of Plus, owned 96 and 23 stores in Romania and Bulgaria respectively.

The economic crisis has proved fertile for the discount retailers expanding on Bulgarian soil and the country saw their boom in 2010.

Kaufland is a part of the Swartz Group which also owns Lidl. It is a soft discounter that entered the Bulgarian market in 2006 in Plovdiv. Now it is strongly positioned on the market with more than 26 hypermarkets.

Penny Market (Rewe Group) is another German soft discounter with an aggressive growth strategy for Bulgaria.