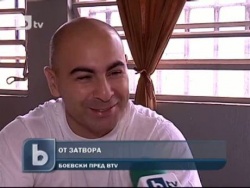 Galabin Boevski, pictured here during a rare TV interview at the Brazilian jail, hopes that at the second-instance court he will manage to prove my innocence. Photo by bTV

Bulgaria's former Olympic weightlifting champion Galabin Boevski, who was convicted in Brazil of international drug trafficking, has appealed the sentence of nine years and four months.

"Galabin's lawyer lodged the appeal against the verdict two weeks ago," his wife Krassimira Boevska announced.

Boevski has fervently claimed innocence in his rare media appearances. In a statement, circulated to the media by his wife Krassimira last month, he vehemently denied to have been involved with anyone during his trip to Brazil and accused the federal court in Sao Paulo of ignoring evidence presented by his defence.

"I hope that at the second-instance court, I will manage to prove my innocence", he said in the declaration.