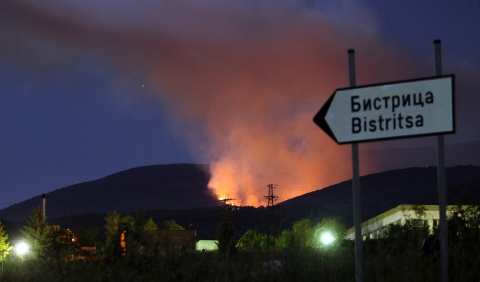 Over the week, a forest fire blazed in a wild area in Vitosha above the Sofia village of Bistritsa, with some fearing it might have been a provocation by angered investors. BGNES

Vitosha Ski acquired the lifts in Vitosha from the Sofia Municipalitiy during a privatization procedure back in 2007, when current Bulgarian PM Boyko Borisov was Sofia's mayor.

However, in the fall of 2011, the company announced it will not operate the lifts and will not open ski facilities for the season, in protest against a denial to expand operations in the mountain.

Vitosha Ski had presented a development project, which was rejected as environmentally unfriendly for the mountain, which, being a designated nature park, is a protected area.

What is more, the company pushed controversial amendments in Bulgaria's Forestry Act that would have virtually scrapped administrative hurdles to go on with expanding facilities in the mountain.

When Parliament adopted the legislation June 13, this triggered spontaneous large-scale protests in Sofia that led to a presidential veto on the act.

The National Assembly is now considering a version of the law that does not include the controversial so-called "Vitosha Ski amendments."

Citizens marched Thursday to show they were on the alert regarding the legislative process, and to request the cancellation of the privatization contract with the company, which they see as bullying hikers, skiers and the government.

"I have invited Vitosha Ski representatives for discussion Monday, and if they do not re-launch the lifts, Sofia Municipality might bring the matter to court," said Sofia mayor Fandakova Sunday.

It is not clear whether the company is in breach of the privatization contract by refusing to operate the facilities it now owns.

The contract does not explicitly specify that Vitosha Ski is obliged to actually operate the lifts, but it mandates that the company does not have the right to change the nature of the facilities it is purchasing.