Bulgarian PM in Croatia: We Wish to Be EU's Role Model 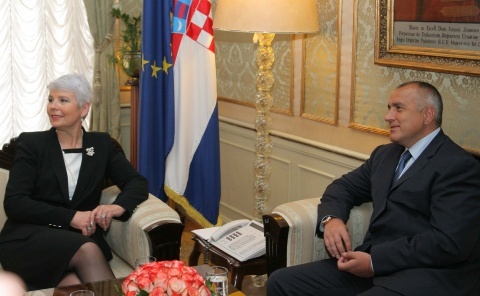 Borisov made the statement in Croatia where he is attending Summit 2012 - Development of Statehood and the Experience of the European Union.

In his speech, the PM expressed his pride of the ethnic peace and tolerance existing in Bulgaria, giving as example the representation of various ethnic groups in the government. Borisov said that both NATO and the EU have strict criteria, whose implementation is a must for the accession of applicant EU members.

"According to the best European economists and finance experts, countries should have less than 3% budget deficit. Currently Bulgaria has a budget deficit under 2%, so this is achievable," Borisov said. He added that this achievement has been reached through a number of restrictions, the freeze of pensions and salaries for three years in the condition of a financial and economic crisis.

"Bulgarians suffered. This is not a politically popular measure, but now only Bulgaria, Denmark and Sweden meet the requirement for the budget deficit," the Prime Minister stressed and presented to the forum's delegates information about the deal with the sale of sovereign bonds, concluded just days ago.

"If countries meet these criteria and do not increase inflation, there will be no crisis in Europe," Borisov stated, reminding that the EC has lifted the excessive deficit procedure against Bulgaria and Germany.

The PM also commented on the accelerated absorption of EU funds and the importance of the cohesion policy for regional development. He noted that only days ago the government received a positive assessment by the Commissioner for Regional Policy, Johannes Hahn, for the implementation of projects in the country.

"In the three years of our term we worked much on the administrative capacity of the units which deal with the absorption of EU funds," Borisov said.

He also presented before the participants in the Dubrovnik event the results of police operations busting huge amounts of narcotics, pointing out the collaboration and partnership with Europol is a must for Balkan countries.

He underlined the key importance of building infrastructure in the region, particularly with EU funds.

"Europe is our role model. We want to be there, to be accepted, but also to become a role model on our own, to show that we are equal to others," Borisov concluded.