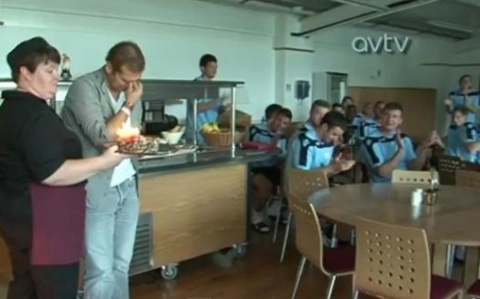 Cancer-stricken Stiliyan Petrov was in high spirits during his visit to Aston Villa's training complex, but when his team players started singing “Happy Birthday”, got very emotional and could not hide his tears. Photo by AVTV

As Aston Villa teammates and staff sang him "Happy Birthday" on Thursday, the eyes of the Bulgarian skipper Stiliyan Petrov welled up with tears.

Petrov visited the club's Bodymoor Heath training ground on Thursday - his 33rd birthday – three months after being shockingly diagnosed with acute leukemia and beginning the toughest battle of his life.

“I had so many wishes. It is a good day and I hope I will keep receiving these messages a few more good fifty years,” an optimistic Stan told the club’s site, smiling.

He was in high spirits during the visit to the club’s training complex, but when his team players started singing “Happy Birthday”, got very emotional and could not hide his tears.

"I've been a strong character since the start of my career. I am just not going to stop fighting. I have always been a fighter and I will just keep fighting," he said.

"I know I've got a few more months of chemotherapy and I need to go through it, but I think that the hardest bit is over and from now on I just need to wait for the result to be positive."

The Bulgarian midfielder admitted the overwhelming support he has received has been a massive boost.

"It has been great, the support I have received," he told AVTV.

"I want to thank everybody for their support. It has been magnificent.

"Sometimes it is hard when you are going through chemotherapy and you get people sending you soft messages.

"But I want to thank every one of them because the support has been great and it has been helping me quite a lot.

"I had a tough three months but I'm over the hurdle at the moment.

"But that is the way it is. I knew from the start how it was going to be.