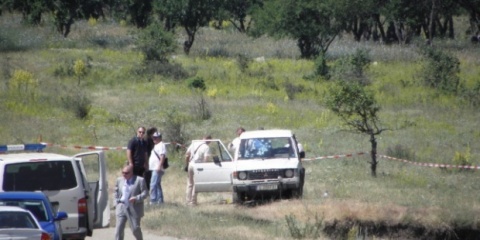 The scene of the deadly shooting near Bulgarian town of Razlog. Photo by BGNES

Emine Kioseva, 49, the woman who was seriously injured in a shooting near the Bulgarian mountain town of Razlog, has died at 3 am Thursday morning in the local hospital.

Two men were shot dead in the same incident Tuesday in an SUV in the southwestern village of Banya, in the vicinity of Razlog.

The two murdered men were 49-year-old Vasil Donev aka "Donevio", an usurer from the town of Bansko, and his associate.

Emine's husband Miroslav, 50, miraculously survived, sustaining only minor injuries. He is to be released from the hospital later Thursday.

The woman was listed in critical condition with 8 gunshot wounds. Her condition did not allow her to be moved to a hospital in the capital Sofia. Doctors list the cause of death as acute heart and respiratory failure.

According to initial information, the murder weapon was AK-47, Interior Minister Tsvetan Tsvetanov has revealed.

The Interior Minister suspects that the killers were acquainted with the vehicle's daily route.