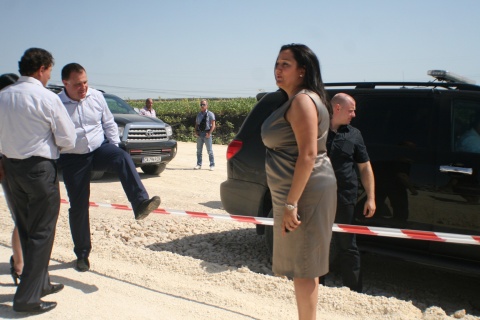 The delays in the construction of Lot 1 of Bulgaria's Maritsa Highway leading to the border with Turkey will be made up for, according to the Bulgarian government.

The construction of Lot 1 of the Maritsa Highway – between Orizovo and Dimitrovgrad – was inspected Wednesday by Prime Minister Boyko Borisov and Regional Development Minister Lilyana Pavlova.

Lot 1 between Orizovo and Dimitrovgrad is 31.4-km long and is part of the Pan-European Transport Corridor connecting Central and Eastern Europe with the Middle East and Asia.

It is scheduled to be completed in 25 months by the Italian contractor Cooperativa Muratori & Cementisti, CMC, from Ravenna.

CMC has been selected through an international public tender. The financing of over BGN 133 M is provided by the EU Operational Program "Transport", another BGN 27 M are provided from the Bulgarian budget.

By the end of July 2012 the builder is supposed to start the construction of 480-meter long bridge on the Maritsa River, which will be the largest facility along the highway section's route, Darik Radio reported.

The delay caused by archaeological excavations – which are supposed to be done by August 2012 – will be made up for with additional workers and equipment, PM Borisov said.

In his words, there are 250 workers and 135 vehicles currently working on the construction of Lot 1 of the Maritsa Highway.