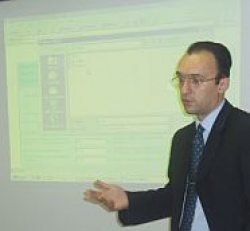 Krum Garkov has been appointed as head of a new EU Agency for large-scale information systems in the Home Affairs area. File photo

Bulgarian Krum Garkov has been appointed as Executive Director of a new EU Agency for large-scale information systems in the Home Affairs area.

The decision for the appointment was made by the administrative council of the Agency, according to reports of Baltic News Service.

Garkov was chosen among a total of ten candidates in a procedure lasting about two months.

Garkov had 19 votes in his favor, 3 votes supported his sole final-stage rival, 1 ballot was invalid and 5 abstained.

The newly selected Executive Director of the Agency has a track record of managing large IT organizations both in the public and private sector, according to the EC press office.

He is said to possess extensive experience in spearheading strategy development and daily operations of major national and international IT systems in a wide range of areas including taxation and revenue collection, privatization and risk management.

Prior to his appointment as head of the EU's IT Agency, Garkov was Operations Director for Experian Group Ltd.

EURODAC is an IT system for comparing the fingerprints of asylum seekers and irregular migrants, a media statement of the EC press office specifies. EURODAC facilitates the application of the Dublin II Regulation, which makes it possible to determine the Member State responsible for examining an asylum application. The Commission is currently responsible for the EURODAC central unit and for data transmissions via this system and will retain these responsibilities until the Agency becomes operational.

The Visa Information System (VIS) supports the implementation of the common visa policy and facilitates effective border control. It enables national authorities to enter and consult data on visa applications to enter the Schengen Area, including biometrics. The VIS started operations on 8 October 2011 (IP/11/1169 and MEMO/11/682). The first consular posts connected to the system were those in North Africa (Algeria, Egypt, Libya, Mauritania, Morocco and Tunisia). The Commission is currently responsible for managing the VIS until the Agency becomes fully operational.

The second-generation Schengen Information System (SIS II) will facilitate the exchange of information on persons and objects between national border control authorities, police, customs, visa and judicial authorities throughout the Schengen Area. SIS II will take over from the existing Schengen Information System (SIS 1+), providing a more modern and up-to-date system with new and enhanced functionalities, such as the possibility of including biometric data. SIS II will therefore enhance security within the Schengen area. This system, which is due to enter into operations in 2013, will be managed directly by the Agency from that time onwards.