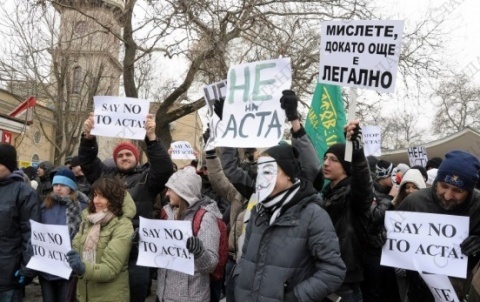 In February, thousands marched through downtown Bulgarian capital Sofia and a number of cities across the country to protest the ACTA agreement over fears it would severely violate internet freedoms. Photo by BTA

The European Parliament rejected the controversial global Anti-Counterfeiting Trade Agreement in a crucial vote on Wednesday.

MEPs voted overwhelmingly against ACTA, with 478 votes against and only 39 in favor of it. There were 146 abstentions.

The agreement is now scrapped as far as the European Union is concerned.

A majority of MEPs expressed serious concerns about anti-counterfeiting treaty ACTA in a plenary debate ahead of Wednesday's vote.

"My strong recommendation is that we reject the ACTA treaty," Parliament's rapporteur David Martin declared, reiterating concerns on how the treaty could be applied and interpreted.

For ACTA to enter into force in the EU, the agreement had to be ratified by the European Parliament, the Council and all member states. Several member states, including Bulgaria, had already said they will not ratify ACTA.

ACTA, abbreviation for Anti-Counterfeiting Trade Agreement, mandated that signatory countries implement legislation to criminalize certain types of downloading content such as music and movies, from sites not sanctioned by rights owners, such as torrent trackers.

On January 26, 2012, the Bulgarian government signed in Tokyo the international ACTA agreement that would make downloading content similar to forgery of brands.

The agreement was sealed by Bulgarian ambassador to Japan Lyubomir Todorov, based on a decision by the Bulgarian cabinet taken hastily on January 11. Bulgarians were kept in the dark about the decision.

After protests took place in 16 Bulgarian cities in mid-February, the government announced that it is halting the ratification.