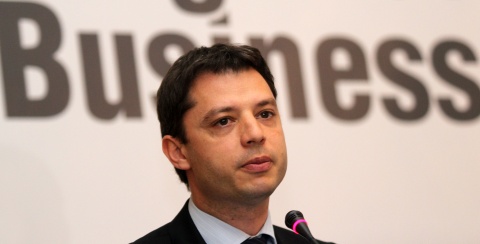 Bulgarian Economy Minister Delyan Dobrev at the Bulgaria: Business UP investment conference in Sofia, May 2012. Photo by BGNES

An exclusive interview of Novinite.com (Sofia News Agency) and Novinite.bg with Bulgarian Minister of Economy, Energy, and Tourism Delyan Dobrev.

Delyan Dobrev was born in the southern Bulgarian city of Haskovo in 1978. He graduated with a Bachelor's Degree in economics from Wesleyan University, CT, USA, in 2002, and a Master's in marketing from the University of National and World Economy in Sofia. He has worked for KPMG in Toronto, Canada, and Newton Finance Group in Sofia, Bulgaria. He has also worked at the District Governor's Office in Bulgaria's Haskovo. In 2009-2011, Dobrev was the deputy chair of the Economic Policy Committee in the Bulgarian Parliament. In May 2011, he was appointed Deputy Economy Minister, and in March 2012, he was appointed Minister of Economy, Energy, and Tourism.

Dobrev's interview is dedicated to the first international investment conference "Bulgaria: Business UP", which took place in Sofia in May 2012. "Bulgaria: Business UP" is an initiative of Novinite.com (Sofia News Agency), the largest Bularian English-language media, and Novinite.bg, a Bulgarian-language news website, together with the InvestBulgaria Agency, designed to analyze and promote Bulgaria's investment advantages and potential.

How would you describe Bulgaria's major advantages when it comes to attracting foreign investment?

Bulgaria's major advantage is the low taxes. I am sure that this is 80% of the investment decision. Bulgaria has 10% flat corporate tax, 10% personal income tax, 5% dividend tax, 0% tax for reinvested earnings in more than 130 municipalities with high unemployment.

Bulgaria is facing competition from other Central and Eastern European countries which is why the Bulgarian government is mulling new incentives on how to sway investors with respect to what makes up the other 20% of the investment decisions.

Which are Bulgaria's main regional competitors in the quest for FDI?

Serbia is Bulgaria's most serious competitor for attracting foreign direct investment. Serbia's subsidy for a company which creates 1000 jobs is about EUR 17 M. However, Serbia does not have Bulgaria's low taxes, macroeconomic indicators, it's not an EU member, it doesn't have access to EU operational program funds. In the past 1-2 years Bulgaria did lose several important investments to its competitors Serbia, Hungary, Macedonia, and Turkey.

However, the Bulgarian government is now introducing two important new incentives for foreign investors – the setting up of a special single body to handle the projects seeking EU funding under EU Operational Program "Competitiveness", and a proposal to amend the Investment Encouragement Act so as to reimburse investors for some of their social security spending.

There is another very important measure that we have initiated with the InvestBulgaria Agency in order to demonstrate the support of the state for the investors – we are assigning personal project managers for each Class A investment project worth over EUR 10 M.

It turns out that the major concern of the foreign investors in Bulgaria is that they won't be able to cope with the bureaucracy. This is where the personal project managers are supposed to help.

How do you respond to the criticism that Bulgaria relies way too much on its low taxes in order to attract investors?

The low taxes and the macroeconomic stability – they go hand in hand! – are truly the most important things when making an investment decision. Of course, we don't rely solely on these factors; as you can see, we are also seeking other ways to attract investors.

With the new amendments to the Investment Encouragement Act currently being drafted, we intend to reimburse or exempt investors from some of their social security spending. This measure is still being coordinated with the Finance Ministry.

We are also moving to speed up the administrative procedures, we are introducing these new personal project managers at the InvestBulgaria Agency – who will literally walk with each Class A investor from institution to institution to make sure that all the necessary procedures go smoothly.

Up until now the InvestBulgaria Agency has been working to attract investors to Bulgaria but once they arrive, they have been coping on their own. Our idea now is to provide all investors – foreign and Bulgarian alike – that invest more than EUR 10 M with the assistance of these personal project managers whose job will be to make sure that every single institution provides maximum help to each investors so that the investment project can become operational as quickly as possible.

Bulgaria's government is often criticized for failing to pinpoint several economic as national priorities. Do you think this criticism is justified? Shouldn't Bulgaria focus on 3-4 particular economic sectors?

We are focusing on supporting medium and hi-tech manufacturing and services because this is what boosts competitiveness of the economy and creates well-paid jobs. So we are definitely seeking to boost investment in the real economy.

We have not set up priority economic sectors because I wouldn't say that we will provide less support to an investment project if it does not fall within the categories of such priority spheres. We are providing maximum support to all investors in the real economy.

Of course, there is one exception – the investments in renewable energy – because the previous Renewable Energy Act adopted in 2007 created a speculative environment in which Bulgaria ended up with renewable energy projects for billions of euros, which, however, had all of them been realized, would have created an enormous burden for the people and business with a great electricity price hike.

That is why we are now trying to limit the renewable energy sector in any way possible – especially since we are already closely to achieving Bulgaria's 2020 green energy commitment to the EU. Investments in green energy influence negatively Bulgaria's competitiveness and domestic demand as a whole because they mean higher spending for companies and empty the pockets of consumers.

To sum up, Bulgaria's Investment Encouragement Act is providing support for all investments in the real economy. Of course, the best investments are those in medium and hi-tech manufacturing and services.

What are the specific measures and projects of the Bulgarian government for attracting investors and trade partners from new destinations, i.e. outside the traditional partners in the EU and Euro Area?

All eyes in Bulgaria – and in the entire world for that matter – are on China right now because China is not only demonstrating very high economic growth but it also has enormous financial resources that it seeks to invest abroad.

We hope that with our low taxes, economic stability, predictability, all the incentives that we provide we will manage to convince a number of Chinese companies to invest in Bulgaria as a foundation for their investments in the EU. There are already such companies.

For example, Chinese bicycle producer Dahon, which has a joint venture with a Bulgarian bicycle producer in Plovdiv. As of next year, they plan to increase substantially their output. Most of the components are made in China, some are made in Bulgaria but the bikes are assembled in Bulgaria, which is an investment in the real economy, and gradually more and more of the parts will be produced here. This might seem incredible but in the past 11 years Bulgaria's bicycle exports grew 30 times – from EUR 2 M to almost EUR 60 M in 2011. Apparently, Bulgarian companies in this sector are doing very well.

What is the most important thing to "get Bulgaria's business up"?

I think the most important thing for the large international investors is to demonstrate that the Bulgarian state cares for them, and has a commitment, and that is what we are doing. On the one hand, we will perpetuate the policies of low taxes and macroeconomic stability. On the other hand, we will continue demonstrating the desire of the Bulgarian government to make these investments happen here.

I meet personally with every single investor that expresses interest in investing in Bulgaria in order to assure them of our support. For example, I am now having a meeting with representatives of a foreign company interested in making car parts in Plovdiv, together with the District Governor, Members of Parliament, and other officials so that we can assure them of our support and make them feel at home in Bulgaria.

The friendly environment is very important for the foreign investors. Dialogue between government and business is crucial but the relations between the investors and the research and science institutions is even more important which is why we intend to stimulate the development of the R&D sector and its ties with the businesses. For example, Bulgaria's government is establishing a company that will take care of the construction of the country's first hi-tech park, Sofia Tech Park.