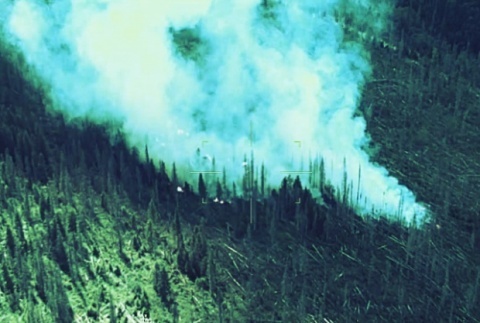 The wildfire in the Vitosha Mountain near Sofia has been raging for four days. Photo by Interior Ministry

The ongoing efforts to extinguish the raging wildfire in Bulgaria's Vitosha Mountain are very badly organized, volunteers have alarmed.

The volunteers have been divided in several groups, volunteer Mirela Zarichinova has told dnevnik.bg.

"Initially, we were ordered to approach the fire from Bistritsa. Later, it turned out that there was a different order – to climb to the Akademik station and approach it from above. Eventually, they put us in a truck. We stayed there for an hour and then they dropped us in Zheleznitsa. Now we are here and nobody tells us anything," she has said.

Zarichinova has pointed out that the volunteers are well equipped and experienced mountaineers.

On Tuesday, volunteer Krum Filyovski wrote on Facebook that there were striking irregularities in the organization of the fire extinguishing operation. His volunteer team waited for hours to receive a fire extinguishing pump to no avail. Officials then told them to withdraw.

"Somebody just did not want it to end there and now! Somebody just wanted the fire to spread upwards," he stated.

The operation is headed by Interior Minister Tsvetan Tsvetanov.

Bulgarians have renewed efforts to extinguish the wildfire that has been raging since Sunday in the Vitosha Mountain near Sofia.

The fire has affected an area of 37 acres in Vitosha's Bistrishko Branishte reserve. However, it is now "completely under control," officials have stated.

Late on Tuesday, Bulgaria's government eventually decided to turn down the international offers for help over the wildfire.