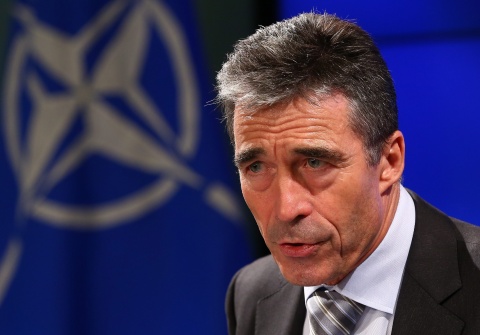 NATO Secretary-General Anders Fogh Rasmussen has played down the risk of a military confrontation between Turkey and Syria.

Rasmussen also said Ankara was justified in beefing up its defenses along the Syrian border, as cited by international media.

Turkey, a key NATO member, has strengthened its troop presence and air defenses along its southern border after Syria shot down one of its jets on June 22, heightening tensions between the neighbors caused by an uprising against Syrian President Bashar al-Assad.

Asked if he was concerned about Turkey's military buildup and whether there was a risk it could lead to a confrontation with Syria, Rasmussen said told a news conference:

"I commend Turkey for having shown restraint despite the very tragic aircraft incident," Rasmussen told a news conference in Brussels on Monday.

"I find it quite normal that Turkey takes necessary steps to protect its population and its territory," he said.

He added NATO had received no request from Turkey to deploy AWACS surveillance planes or other military equipment.

At an emergency meeting in Brussels last week, NATO allies condemned Syria's shooting down of the Turkish military plane, but stopped short of threatening a military response.

Meanwhile, Arab states and Turkey urged Syria's divided opposition on Monday to unite and form a credible alternative to the government of President Bashar al-Assad, but rifts swiftly emerged at talks in Cairo.

The unity calls were made at the opening of a two-day meeting organized by the Arab League to try to rally Syria's opposition, which has been beset by in-fighting that diplomats say have made it tougher for the world to respond to the crisis.

Sixteen months into an uprising against Assad, squabbling among the opposition makes it less likely to be able to win international recognition or to get more than half-hearted foreign support.

"It is not acceptable to waste this opportunity in any way. The sacrifices of the Syrian people are bigger than us all and more precious than any differences or individual and party interests," Arab League Secretary-General Nabil Elaraby said, addressing the roughly 200 Syrian politicians and activists.