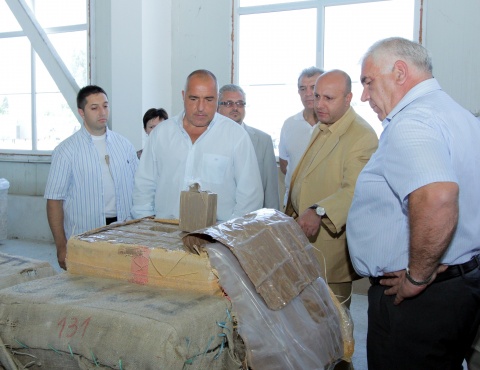 Bulgarian PM Borisov (middle), Chief Commissar Florov (next to him), and Customs Agency head Tanov (right) look at packages from the hashish shipment busted at the Danube ferry in Vidin. Photo by BGNES

Prime Minister Boyko Borisov has touted the capture of a large hashish shipment by the Bulgarian Customs Agency as evidence that Bulgaria is a secure "Schengen border".

"We have demonstrated that the money we invested in portable scanners for the Customs yielded results, and we are a secure border of the Schengen Area," Borisov said Monday, after on Sunday the customs officers at the Vidin Danube Ferry border crossing nabbed a hashish shipment of 4.2 metric tons.

Bulgaria's hopes to join the borderless European Schengen Area were dashed in 2011, and it is still unclear when it might be allowed to join by the other members.

The Bulgarian PM visited the border crossing of the Danube ferry in Vidin Monday together with the head of the Customs Agency Vanyo Tanov and Chief Commissar Stanimir Florov, head of Bulgaria's Unit for Combating Organized Crime, GDBOP.

"This enormous amount of hashish worth BGN 40 M (EUR 20 M) was destined for Belgium so the Europeans must be thankful to us because their people won't be drugging themselves with what we've busted here," Borisov stated.

"The transportation of such large quantities of drugs is executed by tossing the packages in the sea, and having fishermen pick them up, and load them into various-sized vehicles that head off to different channels. The persons who were involved in this shipment were three, and they were followed by GDBOP as far back as 2006. I really wish to stress the good work of the Customs, GDBOP, and the Prosecutor's Office, and special thanks to the City Prosecutor's Office in Vidin," the Prime Minister explained.

The drugs were found on Sunday after the local customs officers inspected a truck with Bulgarian license plates headed to Belgium; it was driven by 42-year-old Bulgarian citizen.

The truck was inspected with the brand-new x-ray equipment of the Vidin Ferry Customs, which allowed the officers to find a number of packages containing the drugs.

A total of 132 packages averaging about 32 kg of hashish each were discovered inside the truck subsequently, totaling 4.2 metric tons.