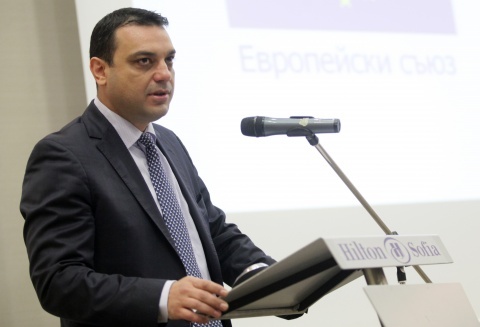 All trains serving the railroad line between the second largest city of Plovdiv and the town of Dimitrovgrad in southern Bulgaria can now travel with speeds up to 160 km/h.

Officials and reporters had the opportunity to experience firsthand the new high-speed car Desiro and travel with 140 km/h. After the trip, Borisov handed to the CEO of the National Railroad Infrastructure Company, Milcho Lambrev, the official permit for the use of the section.

The line between Plovdiv and Dimitrovgrad is part of the project "Reconstruction and Modernization of the Plovdiv – Svilengrad (Greek and Turkish Border) Railroad." It is financed by the EU ISPA and Transport operational programs. The section is 67-km-long and allows speeds of 160 km/h for passenger trains and 120 km/h for freight ones.

It is expected that the section Svilengrad – Turkish Border will be completed by the end of 2012, while the section Dimitrovgrad – Svilengrad is divided in two lots. The contractors, which have already been selected, will start work there in just days.