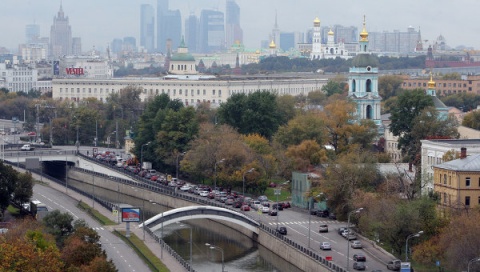 According to the plan of the Russian capital's new structure, Moscow's land area doubled on July 1 after being enlarged by 150,000 hectares, RIA Novosti reported on Sunday.

The so-called "Big Moscow" includes the territory of the two cities in Moscow region, Shcherbinka and Troitsk as well as 19 smaller residential areas.

Over 232,000 people, who became Muscovites overnight, will reduce the city's population density from 10,700 people per square kilometer to 4,600 people.

The move, which is aimed to relief the city's center from traffic jams, will allow "the 20-million urban area to develop harmoniously," Moscow Mayor Sergei Sobyanin said on Sunday.

Sobyanin also said that Moscow's expansion would create new jobs, new scientific centers that would appear in Troitsk and Russian innovation hub, Skolkovo and the international Financial Center which is due to appear near the Rublyovo-Arkhangelskoye highway.

The expansion of the municipal borders come a year after Medvedev proposed in June 2011 expanding Moscow's present borders and creating a new "metropolitan federal district."

The Russian capital is among the ten largest cities in the world, with an officially registered population of over 10.5 million.