Hague Calls on UN to Allow Military Intervention in Syria 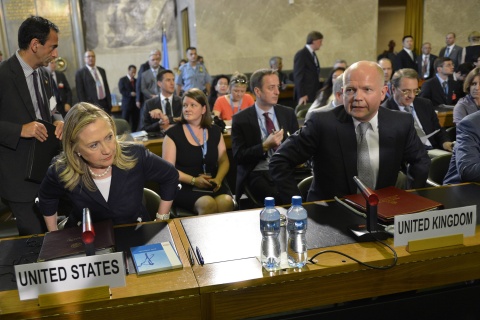 US Secretary of State Hillary Clinton (L) takes her seat next to British Foreign Secretary William Hague (R) prior to a meeting of the Action Group for Syria at the European headquarters of the United Nations in Geneva, Switzerland, 30 June 2012. EPA/BGNE

UK Minister of Foreign Affairs William Hague has called UN Security Council members to draft a resolution allowing the use of military force to tame the conflict raging in Syria.

Saturday a number of foreign affairs ministers are meeting in the European headquarters of the UN in Geneva in a so-called Action Group for Syria to discuss measures to be taken regarding the troubled country.

In his speech, Hague made it clear that his position still radically differs from that of Russia, represented at the meeting by Minister of Foreign Affairs Sergey Lavrov.

"The situation necessitates an immediate approval by the Security Council of a resolution in accordance with Chapter 7 of the UN Charter," said the British FM.

The chapter allows the use of force in cases of threats and encroachments against peace.