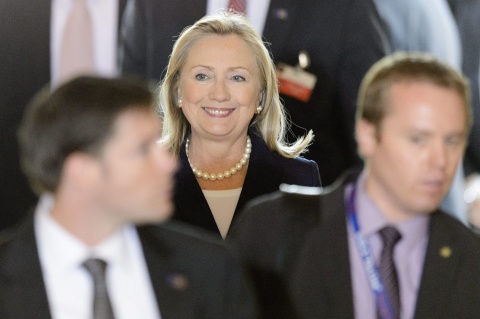 Hillary Rodham Clinton (C), Secretary of State of the United States of America, arrives for a meeting of the Action Group for Syria at the European headquarters of the United Nations in Geneva, Switzerland, 30 June 2012. Photo by EPA/BGNES

The USA is resolved to find a new way for funding NGOs in Russia to circumvent currently developed restrictive legislation, according to information by Russian activists.

Saturday Russian paper Kommersant reports that NGO representatives were satisfied with the meeting with US Secretary of State Hillary Clinton who visited St. Petersburg to meet them Friday.

The main topic of talks was the Russian legislative proposal, according to which NGOs involved in political activity and receiving funding from abroad will be classified as "foreign agents."

"Ms. Clinton said she is acquainted with the issue and she is concerned about changing the channels of US support for organizations so that they are not incriminated," said activists Dmitry Dubrovsky.

Saturday Hillary Clinton is travelling to Geneva, where foreign ministers from several countries, including Russia, will take part in a meeting to discuss the grave situation in Syria.