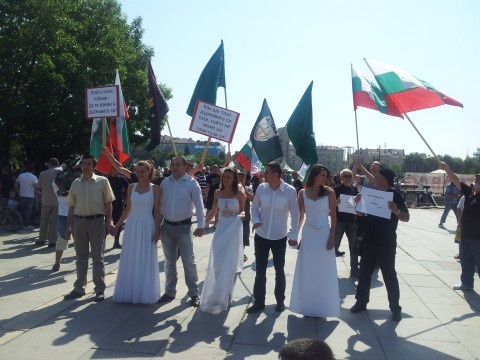 The few far-right activists who assembled in a homophobic rally in Sofia brought with them couples dressed in wedding clothes. Photo by OffNews.OffRoad-Bulgaria.com

Saturday's nationalist anti-Gay Pride rally in Bulgarian capital Sofia attracted only 200 protesters, but made some extravagant claims to boot.

Protesters have chosen "68 Years of Foreign Idols Worship are Enough" as the motto for their protest, strangely referring to 1944, the year Bulgaria begame a communist country.

However, they also cried out against what they see as an excessive interference of the USA in Bulgarian politics and society.

Outgoing US ambassador to Bulgaria James Warlick will be present at the Sofia Gay Pride together with his family.

"Homosexualism is a perverted fashion imported from the US," stated some of the ralliers, as quoted by OffNews.bg.

The news site also said that nationalists went as far as to express fears that the US might turn Bulgaria into a gay sex tourism destination, and even introduce pedophiles in the country.

The march was fronted by a large sign reading "Protest by patriots against the pederasts' aggression."

Some ralliers were even more aggressive, shouting out "Death to faggots!", reports News.bg.