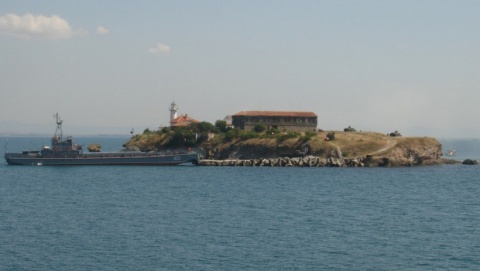 The Bulgarian Navy practiced reaction to a terrorist attack during the Breeze 2012 naval drills. Photo by Defense Ministry

The Bulgarian Navy has been praised by Bulgaria's Defense Minister Anyu Angelov for its performance during the Breeze 2012 naval drills.

On Thursday, Angelov, together with Bulgaria's Head of Defense Gen. Simeon Simeonov and several government ministers attended the open day of the naval drills.

Angelov has pointed out that the Bulgarian Navy demonstrated successfully a rescue effort with its brand new Eurocopter Panther helicopters.

"The funds that we set aside from the Defense Ministry budget for such drills are substantial. The goals – increasing the operational capacities of the Bulgarian armed forces - and their achievement fully justify the costs," Angelov stated.

Head of Defense Gen. Simenov praised the good interoperability between the various Bulgarian institutions that took part in the Breeze 2012 naval exercises, including civilian institutions and NGOs. The drills are said to have contributed to the capacities for the third mission of the Bulgarian armed forced – peace-time rescue and relief efforts.

On Friday, the Bulgarian Navy demonstrated its capacities to cope with the consequences of a terrorist attack and to provide humanitarian assistance.

The Bulgarian Navy is the host of the international Breeze 2012 naval drills in the Western Black Sea taking place June 22-July 1, 2012.

The goal of Breeze 2012 is to improve the interoperability of multinational naval forces of NATO nations. It features participation by the Bulgarian Navy, the Turkish Navy, the Greek Navy, a US patrol air plane, and three ships from the Second Permanent Naval Group of NATO.

During the Breeze 2012 drills, the Bulgarian frigate Drazki ("Bold") is having its NATO MAREVAL certification affirmed.