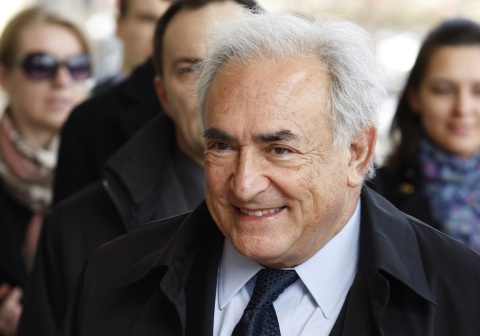 Dominique Strauss-Kahn, the former head International Monetary Fund smiles as he arrived for his lecture in the Ukrainian Diplomatic Academy in Kiev, Ukraine, 04 April 2012. EPA/BGNES

After months of loyal support in the face of seedy vice allegations, Anne Sinclair "kicked the former International Monetary Fund boss out of their Paris home," The Daily Mail says.

"They are no longer living as man and wife," a source close to Strauss-Kahn has stated.

According to the reports, the split happened a month ago and he has been living alone ever since.

The couple have been married for 20 years. Anne Sinclair accompanied her husband to all court hearings.

Strauss-Kahn's career was ruined in 2011, as a chambermaid at the Sofitel Hotel in Manhattan accused Strauss-Kahn of sexual assault.

Prosecutors dropped all charges against Strauss-Kahn on August 23 after doubts emerged over the credibility of his accuser, Guinean immigrant Nafissatou Diallo.

Later, an investigation was launched into a prostitution ring based in France in which the former IMF head was implicated.