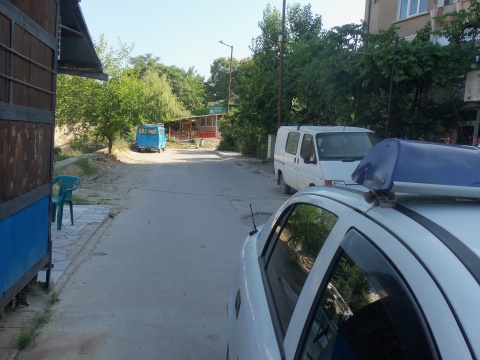 A powerful explosion in front of the Euroroma party’s headquarters in Sandanski has left one man seriously injured. Photo by BGNES

A powerful blast, which shook the south-western Bulgarian town of Sandanski early on Friday, has left a 59-year-old Roma man in critical condition.

According to Georgi Kostov from the district police directorate in Blagoevgrad, Malin Iliev was passing by when he noticed a suspicious package in front of the office of the Euroroma party in the town.

When he lifted the package, the bomb went off, tearing off one of Iliev's arms.

The accident happened at around 6 a.m. on Friday.

The man was taken to the hospital in Sandanski and his life is in danger.

According to preliminary reports, Iliev was on the Euroroma list of candidates at the last round of local elections in the town.

The investigation is at an initial stage and the police authorities cannot yet provide information about the reasons behind the blast or the detonation mechanism.

The Euroroma party's headquarters in Sandanski are located near the town's market.

The massive blast blew out most windows in the building as well as nearby buildings.

Police have sealed off the area to conduct investigative work.

Experts are yet to determine the type of the bomb.