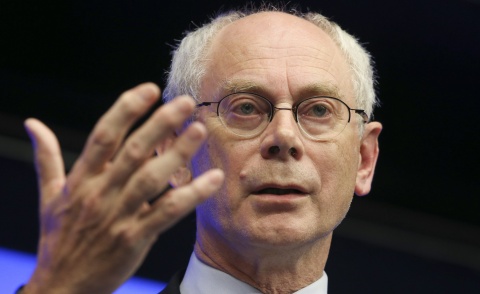 European leaders agreed late on Thursday to set aside EUR 120 B to stimulate growth in the bloc's weakest economies.

The two countries refused to sign up to the pact, saying that their borrowing costs were too high and they were seeking short-term measures to ease market pressure.

"The key element is that we boost the financing of the economy by mobilizing around EUR 120 billion for immediate growth matters," said Van Rompuy at a press conference, as cited by VOA News.

The main aspects of the EU growth pact were drafted last week by the leaders of Germany, France, Italy and Spain, the four largest euro-area economies.

The pact envisages a EUR 10 B increase in the funds of the European Investment Bank, which will raise its overall lending capacity by EUR 60 B, according to Van Rompuy.

The move signals a shift away from the austerity measures that Germany, in particular, had prescribed in response to the debt crisis in the eurozone, according to reports of CNN.

The leaders are also discussing steps toward deeper integration, with the hopes of clarifying a path forward for the economic and monetary union.

Discussions on the matter are to continue on Friday.