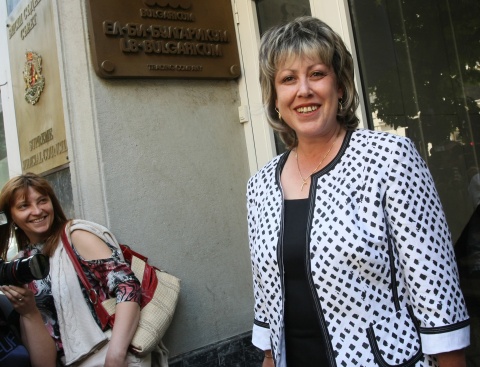 Judge Velichka Tsanova has filed a complaint with the European Court of Human Rights in Strasbourg over the incendiary appointment procedure of a Sofia City Court Chair. Photo by BGNES

The widely contested appointment of a Sofia City Court (SCC) Chair has reached the European Court of Human Rights in Strasbourg.

Velichka Tsanova, who ranked second to the highly-controversial friend of Interior Minister Tsvetan Tsvetanov, Vladimira Yaneva, has filed a complained with the Strasbourg-based court, according to reports of the Bulgarian Telegraph Agency (BTA).

Tsanova is suing Bulgaria because the state failed to secure her right to a fair trial.

Tsanova's team of defenders has sought a priority treatment of the complaint due to the outstanding importance of the issues it involves, including the independence of the judiciary in Bulgaria.

The complaint mentions an alarming and persistent trend of eroding the independence of the judiciary in Bulgaria through opaque and unpredictable appointments of judges and chairs of courts.

Tsanova's team of lawyers further remind that the issue of controversial and unconvincing appointments and promotions in the judiciary has been repeatedly pointed out in a series of report of the European Commission on Bulgaria, the case of the SCC Chair being a prominent example.

The legal experts argue that judicial appointments need to be made exclusively on the basis of the candidate's merits, rather than subjective reasons like personal, political and other interests.

On January 12, a five-judge panel of the Supreme Administrative Court (VAS) conclusively upheld the appointment of Vladimira Yaneva as Chair of the Sofia City Court.

The lawsuit was initiated by the other candidate for the post, Velichka Tsanova, who claimed that the criteria applied by the Supreme Judicial Council (VSS) in the procedure had been unclear.

The scandal with Vladimira Yaneva broke out at the end of May 2011, when she won the post of Sofia City Court Chair despite her scant four years of experience, two of which had been spent on a maternity leave.

Yaneva's sole rival was Velichka Tsanova, a judge with extensive experience, Deputy Chair and temporarily in charge of the same court.

Yaneva won the appointment in a re-vote.

Yaneva, who has admitted to be close family friend of Interior Minister, Tsvetan Tsvetanov, also ended up mired in a conflict-of-interest saga.

Bulgaria's Commission for Prevention and Ascertainment of Conflict of Interest eventually acquitted Yaneva of conflict of interest charges and the Sofia City Prosecutor's Office upheld the ruling.

The VSS Inspectorate, however, found that the SCC Chair had flouted deadlines in the Sofyiski Imoti case, as well as in a number of other cases, for which she had to face disciplinary action.

Yaneva's appointment sent shockwaves through the judicial system in Bulgaria, triggering several protest resignations and accusations of unauthorized intervention on the part of the executive in affairs of the judiciary.

At the same time, two parallel protest campaigns urging the "totally discredited" VSS to collectively resign were organized by the Bulgarian Helsinki Committee and by the bivol.bg website for investigative journalism.