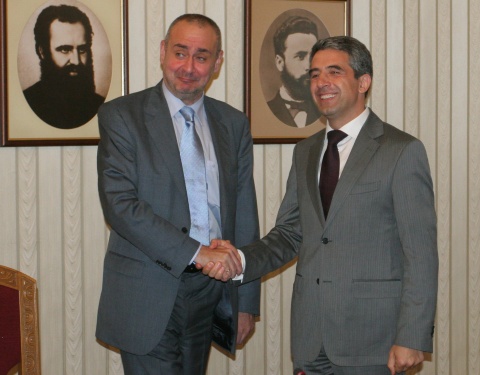 President Rosen Plevneliev (R) and Chief Prosecutor Boris Velchev (L) met Thursday to discuss the future of the EC monitoring mechanism for Bulgaria in the sphere of justice and home affairs. Photo by BGNES

Bulgarian President Rosen Plevneliev voiced criticism of the measures taken to combat corruption at a meeting with Chief Prosecutor Boris Velchev on Thursday.

"I was also very self-critical in this respect at a certain point," Velchev admitted, adding that "we have good results in fighting organized crime, tax crimes and EU funds fraud, but the achievements in the field of counteracting corruption are insufficient."

During Thursday's meeting, Velchev and Plevneliev agreed that the next few months would be decisive for the future of the EC monitoring of Bulgaria in the sphere of justice and home affairs.

"However, the mechanism the European Commission used to select the cases it would monitor remained a total mystery to me," the Chief Prosecutor stated, voicing his dissatisfaction with the 'unclear' criteria applied by Brussels to select high-profile cases.

"No matter what happens with the monitoring mechanism, I would very much appreciate clear-cut criteria for the cases that are subject to supervision," Velchev noted.

"If some 15-20 cases, which are expected to turn problematic, are to be used to judge some 260 000 cases, which are being dealt with on a regular basis, I should say I find this somewhat unfair," the Chief Prosecutor underscored.

He further sided with the conclusion of Lazar Gruev, Chair of the Supreme Court of Cassation (VKS) that acquittals in Bulgaria were much less than in other EU countries.

"Acquittals are a hallmark of democracy in a civilized society and they should not be used as the only criterion for the work of the prosecuting authority. I am not sure, but I believe that there were no acquittals during the Gaddafi regime," Velchev added.

Velchev pointed out that Bulgarian prosecutors had worked on 260 000 pre-trial proceedings and over 350 000 preliminary checks in 2011.

He called for objective criticism towards the prosecuting authority, stressing that the quality and efficiency of its work had to be estimated with a view to its workload and its capacity.

Velchev is to present next week in Parliament a regular report on the work of the Prosecutor's Offce in Bulgaria.