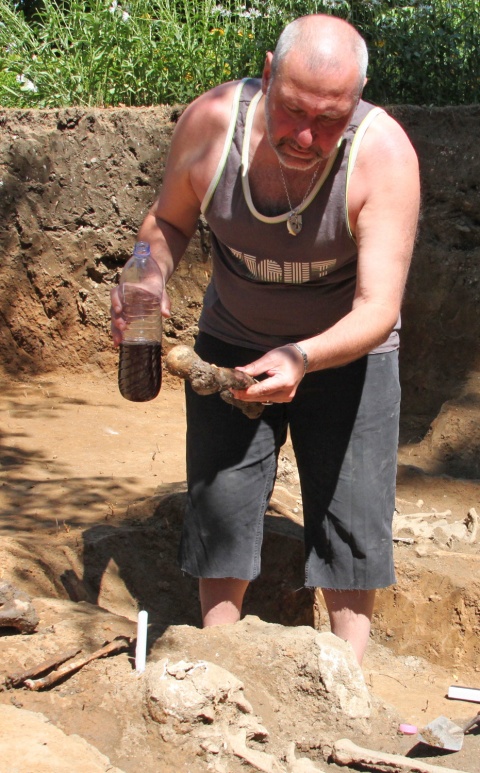 Bulgarian archaeologist Prof. Nikolay Ovcharov, aka the Bulgarian Indiana Jones, performs a ritual of cleasing the bones of a medieval "vampire" with wine before their reburial. Photo by BGNES

Bulgarian archaeologists have conducted a ritual reburial of a man discovered in a medieval grave who was treated against vampirism, the latest among a couple of other similar discoveries in Bulgaria that made global headlines.

The grave in question was one of the 10 medieval graves found during excavations by the team of Prof. Nikolay Ovcharov and Prof. Hitko Vachev in the necropolis of the St. Peter and St. Paul Monastery complex in Veliko Tarnovo, one of Bulgaria's medieval capitals, dating back to the 13th century, the apex of the Second Bulgarian Empire, BGNES reported.

Earlier in June, Bulgarian archaeologists in the Black Sea town of Sozopol found the grave of a medieval noble whose skeleton had a metal spike in its chest, an apparent precaution ritual against vampirism designed to prevent the dead person from rising from his grave as a vampire. Within a few weeks, the discovery, which made global headlines, was followed by a couple of more instances of unearthing of medieval graves bearing signs of rituals against vampirism.

Unlike the first "vampire" in Sozopol, however, the one whose grave was uncovered by Ovcharov and Vachev in Veliko Tarnovo did not have a spike in his chest but was buried with his hands and feed tied, and with pieces of ember placed inside the grave. According to ethnographic experts, these are signs of a medieval ritual designed to prevent after-death vampirism.

Also unlike the other medieval "vampire", whose grave was found in Sozopol, and whose skeleton has been taken to Bulgaria's National History Museum in Sofia, the "vampire" found in Veliko Tarnovo was reburied by Prof. Nikolay Ovcharov after it was studied by the archaeologists.

Ovcharov and his colleagues performed another ethnographic ritual in which the "vampire's" bones were cleansed with wine and water, and were placed together in a new grave close to the old one together with the lighting of candles in the Bulgarian Orthodox Christian tradition. 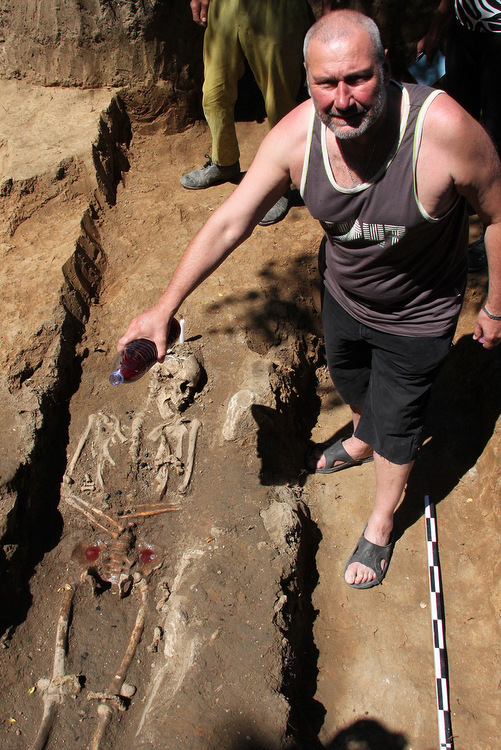 Bulgarian archaeologist Prof. Nikolay Ovcharov, aka The Bulgarian Indiana Jones, pouring wine on a "vampire" skeleton before its excavation and reburial, according to an ethnographic ritual. Photo by BGNES