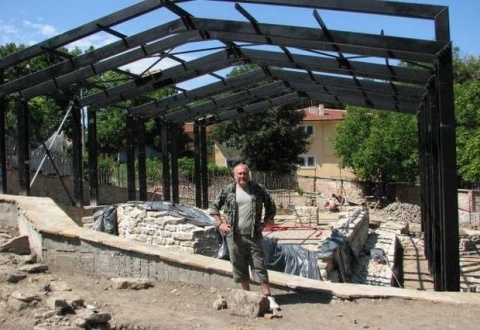 Bulgarian archaeologists have uncovered new finds from a monastery dating back to the 13th century, i.e. the apex of the Second Bulgarian Empire.

The team of archaeologists Prof. Nikolay Ovcharov and Prof. Hitko Vachev, who have been exploring sites at Veliko Tarnovo, the capital of the Second Bulgarian Empire, have found a number of artifacts, and have uncovered the walls of a medieval church, which was part of the St. Peter and St. Paul Monastery complex in the Middle Ages. It is more precisely associated with the rule of Bulgarian Tsar Ivan Asen II (1218-1241 AD).

"The walls that we have uncovered date back to the first half of the 13th century. Part of the architectural remains have turned out to be ruined by construction in the past 30 years. We have also found a second wall dating back to the 14-15th century which is a testimony as to how the monastery was transformed. In the western section of the temple we even found evidence of a third renovation from the 18-19th century," Prof. Ovcharov explained, as cited by Darik Radio.

In the yard of the St. Peter and St. Paul Church, which is part of the wider monastery complex, the archaeologists already found 10 funerals, one of them turning out to be that of a man treated against vampirism after his death.

Unlike another medieval "vampire", whose grave was recently found in Sozopol on the Black Sea making global headlines, and whose skeleton has been taken to Bulgaria's National History Museum in Sofia, the "vampire" found in Veliko Tarnovo was reburied by Prof. Nikolay Ovcharov after his bones were cleansed with wine and water.

During the recent excavations of the St. Peter and St. Paul Monastery complex in Veliko Tarnovo, the archaeologists have come across over 100 coins from the 13th and 14th century minted by several Bulgarian tsars from the Second Bulgarian Empire.

Other finds include a gold-coated buckled from the 16th century with an inscription in Arabic that is yet to be translated; a silver earing, and a large amount of pottery.

Speaking on Wednesday, Prof. Ovcharov sought to refute public criticism over his discoveries which stated that "the Veliko Tarnovo Municipality pays archaeologists to discover vampire funerals".

In 5 years of exploration of the St. Peter and St. Paul Monastery complex, which was one of the major ones in the Second Bulgarian Empire, the archaeologists have found over 1 000 coins from various ages, almost 30 golden items, 160 silver items, and 55 intact pieces of pottery.

"Our inventory features a total of 1 500 items. If these antiques are sold on the black market, their combined price will probably be above BGN 130 000," Ovcharov estimated.