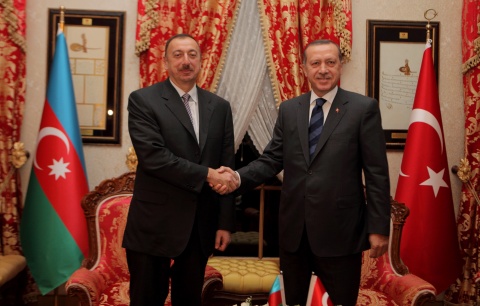 Neighbors Turkey and Azerbaijan have signed a contract for the construction of the Trans-Anatolian gas pipeline (TANAP), set to deliver Azeri gas on to Europe.

Turkish PM Recep Tayyip Erdogan and Azeri President Ilham Aliyev were present at the ceremony, conducted on the sidelines of the Istanbul summit of the Organization of the Black Sea Economic Cooperation.

The future TANAP pipe is previewed to transport some 10 B cub.m. of natural gas from the Shah Deniz and other fields in Azerbaijan to Europe starting 2018.

According to Turkish PM Erdogan, the pipeline will be so constructed as to also allow the delivery of natural gas from Turkmenistan.

The project is expected to cost about USD 7 B and to be constructed over the coming 6 years.

Turkey participates with 20% of the project's shares, divided between state Botas company and oil corporation TPAO; the remaining 80% will be held by Azeri state company SOCAR.

The Trans-Anatolian gas pipeline is seen by some as yet another hurdle on the way of the stalled Nabucco natural gas pipeline, developed by the EU to deliver Azeri gas to Europe.

However, earlier Tuesday, a Nabucco official said that the company does not view TANAP as a competitor, and that the EU pipeline will be built anyway.