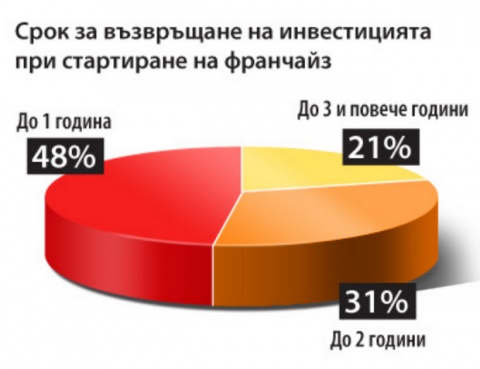 Franchising has been growing by more than 20% annually for five years in a row, according to a survey by Franchising.bg, a consultancy.

The consultancy surveyed a total of 144 franchisers and 385 franchisees in Bulgaria between February and June 2012 to compile its third annual report on the development of franchising business, the practice of using another firm's successful business model, in Bulgaria.

The report says that Bulgarian franchisers usually start offering franchising on average 5 years and 8 months after their founding.

"The major reasons for the fast development of franchising in Bulgaria are the established business model, the offering of a strong brand, and the development of good practices," Franchising.bg states in its report.

According to the survey, in early 2012, there are a total of 3 368 franchisee venues in Bulgaria, which means that their number grew by 16% compared with the latest data for 2011.

Regardless of the high number of global franchisers entering the Bulgarian market, about 56% of all franchisees in Bulgaria belong to Bulgarian companies such as Happy restaurants, Eurofootball – a bookmaker, Second Hand Mania – a clothes store chain, Don Domat - a pizza house, Nedelya – a pastry shop, and Econt – a delivery service.

Franchisers own about 16% of all franchising venues in Bulgaria, while the rest are owned by the franchisees. The average number of venues per franchiser in Bulgaria is 28.4%.

The average franchising fee in Bulgaria at present is about BGN 17 825 (in comparison, the same fee is over USD 40 000 in the USA.

Franchising.bg is a consultancy that assists in the sale, purchase or creation of a franchise in Bulgaria, and organizes the only Bulgarian Franchising Expo in November each year.