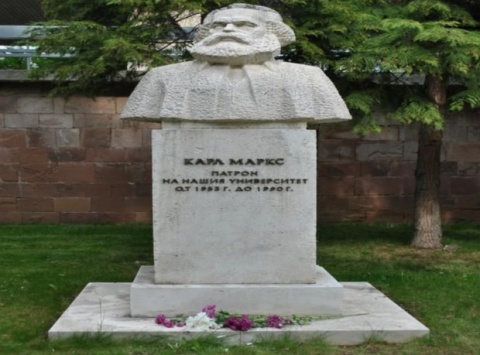 The monument of Karl Marx near the main building of the University of National and World Economy in Sofia. The inscription states, "Patron of Our University in 1953-1990." Photo by shum.bg

A NGO of Bulgarian mothers has declared itself against the existence of a monument of German economist and philosopher Karl Marx (1818-1883) on the campus of the University of National and World Economy in Sofia.

The NGO is called Association of "Mothers against Violence in Studentski Grad" (Studentski Grad (Student's Town) is the Sofia quarter which hosts the dormitories of all major universities in the Bulgarian capital Sofia, with several dozens of thousands of students living there – editor's note).

The "Mothers against Violence" NGO has issued a statement in which it styles Karl Marx the "creator of communist ideology".

"It is more than scandalous that the bust-monument of the person who called for global communist revolution and forceful abolition of private property continues to exist on the campus of the University of National and World Economy often called "the Bulgarian Harvard", state the concerned mothers.

According to the NGO, the monument of Karl Marx on the university campus is incompatible with the hopes of the young people "to get a modern European education."

"It must be explained [to them] that the disciples of Karl Marx in their attempts to apply his ideas in the first half of the 20th century established violent totalitarian regimes in which communism was an official state ideology imposed with mass repressions," the NGO declares, offering its interpretation of why the monument of the 19th century philosopher should be removed.

The Association compares the situation with the Karl Marx monument at UNWE to the practices in North Korea, and argues that the monument must be transferred to the yard of the Museum of Socialist Art, which was opened in Bulgaria's Sofia in 2011.

The Karl Marx monument on the UNWE campus has to do with the fact that before 1989, during the communist period, the university was known as the Karl Marx Institute of Economics.

At the same time, the mothers' association urges the President of UNWE Stati Statev to terminate the renting of a university property to one of the most popular discos in Studentski Grad known for offering chalga – or pop-folk – music – a notorious style that emerged in Bulgaria in the 1990s with oriental motifs focusing on money and sexual allusions.

The Studentski Grad quarter in Sofia is notorious for its criminal environment, and is often the scene of incidents that result in violent deaths.