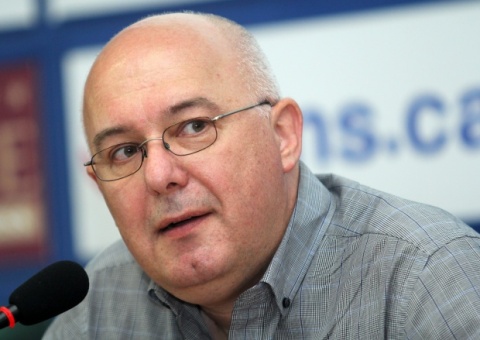 According to the Media Democracy Foundation's CEO, Orlin Spasov, mainstream press in Bulgaria works directly as PR for certain politicians. Photo by BGNES

The data, released Monday, comes from the Lab for Media Monitoring of the Media Democracy Foundation.

In the January-May 2012 period, Borisov has been present in the media 3 670 times, his Deputy, Interior Minister, Tsvetan Tsvetanov, is at a distant second place with 1 453 times, followed by the leader of the opposition, left-wing Bulgarian Socialist Party, BSP, Sergey Stanishev – 1 234 times, former President, Georgi Parvanov – 1 224, the other Deputy PM, Finance Minister, Simeon Djankov – 980 times, and President, Rosen Plevneliev – 903 times.

The Foundation's CEO, Orlin Spasov, commented that there are drastic discrepancies in the approval of certain political leaders and institutions in society and in the media. He noted that despite the raging media war in the country, the adversaries continue to write positively about Borisov, and are actually fighting for his blessings.

"Regarding some key persons, media are boasting their public image and these discrepancies show that currently most mainstream media in Bulgaria work directly as PR for certain politicians," Spasov says.

In his words, representatives of the PM's ruling party Citizens for European Development of Bulgaria, GERB, seldom voice own opinions, letting Borisov personally inform people and direct the party's attitude.

The media rating of the PM in May has been between 4 and 4.5, meaning media mentioned him 4 times more in positive light than in negative.

The media rating of the Speaker of the Parliament, Tsetska Tsacheva is +9, the one of Stanishev is +1, of Plevneliev - +5, the rating of the leader of the ethnic Turkish party Movement for Rights and Freedoms, DPS, Ahmed Dogan is -10, of former EU Commissioner, presidential candidate and founder of the Bulgaria for Citizens movement Meglena Kuneva it is -1.

Almost all, with the exception of Sega, demonstrate a positive attitude towards the Prime Minister, with Telegraph being the most positive. Dnevnik and Trud vacillate between being positive and neutral.

The results show that Telegraph is the newspaper being closest to the power with positive news not only about Borisov, but the entire cabinet. Meanwhile, it is also the sole edition writing positively about Dogan, which, according to Spasov, leads to the conclusion that it works for a "symbolic coalition" between DPS and GERB