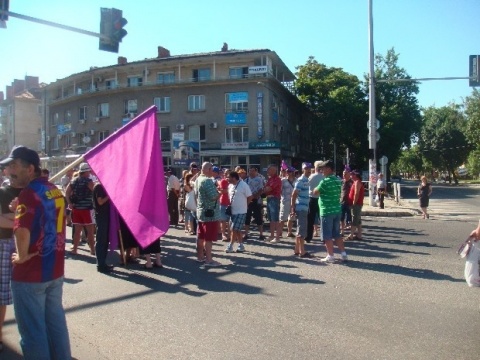 Workers at the plant owned by Valentin Zahariev have not received pay for half a year, which provoked them to stage mass street protests. Photo by DarikNews

First Investment Bank, FIB, has been able to find a private investor for Bulgaria's troubled largest producer of non-ferrous metals, the Lead and Zinc Complex (LZC; OTZK) in the southern city of Kardzhali.

The company is not the Polish consortium Silesia, but the name will be disclosed in 2 weeks.

It was announced on Sunday that FIB is deferring payments on loans of workers from the complex.

The decision came one day after the trade unions accused FIB of condemning the plant by placing distraint on its equipment, and threatened to stage rallies in front of the bank's headquarters in Sofia. This prompted a meeting between the bank's management and the syndicalists where they reached the agreement on the differed repayments for all workers having loans from the bank until they start receiving their wages.

The problems in Kardzhali have been festering since March 2012. The workers at the plant, owned by Valentin Zahariev, have not received their salaries for 6 months now, which provoked a number of mass protest rallies.

After the government interfered, they were paid a 1.5 monthly salary right before Easter. At the time, Prime Minister, Boyko Borisov, personally promised them a new owner, to be found in 2 months. The only interested investor remaining now is Silesia, Economy and Energy Minister, Delyan Dobrev admitted.

However, according to the regional coordinator of the Zashtita (Protection) labor union, Stefan Atanasov, the new investor is not the Polish Holding. He informed that FIB was ready to finance this "mysterious" company, whose representatives are to arrive in Kardzhali in 2 weeks.

"The bank does not want to close the plant and send the 400 workers out on the street," said Atanasov.

In addition, from statements of FIB Director, Vasil Hristov, it emerged that FIB does now want to negotiate with neither Zahariev, the Complex' CEO, Slaveya Stoyanova or Silesia.

FIB is owned by notorious Tseko Minev, whose name made headlines in Bulgaria recently, after the Parliament passed the controversial Forestry Act. The amendments, seen by many as lobbyist and benefiting Minev and a handful of other shady businessmen, triggered mass protests in the capital Sofia.