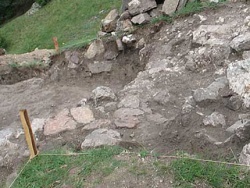 Bulgarian archaeologists working on the track of the Struma Highway under construction have warned that future planned sections of the road might bury important findings.

The highway, set to link Bulgarian capital Sofia to the border with Greece at Kulata, has already been the source of a conflict between archaeologists and the Bulgarian cabinet led by PM Boyko Borisov.

Saturday researchers recalled that the track of the highway passes through over 10 stone mounds of a Thracian necropolis from the 6th and 5th centuries B.C., reports News.bg.

Those mounds however have not yet been thoroughly studied due to excessively rainy weather in May.

Archaeologists working at the site near the village of Delyan will present findings of ancient jewelry Sunday.

They said that there is even a possibility that the ancient king Philip II of Macedon, father of Alexander the Great, might have been buried there.

According to schedule, construction on Lot 1 of the Struma Highway has to start July 1, not leaving archeologists enough time to finish their work.

During last winter, Bulgarian PM Boyko Borisov in his inimitable style said he had no time to waste and advised researchers to don warm clothes and finish off their work during the cold season.