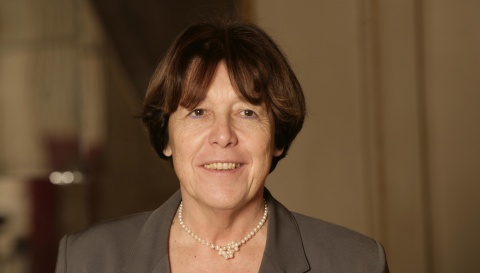 An interview of Novinite.com (Sofia News Agency) and Novinite.bg with Prof. Catherine Brechignac, Chief Secretary of the French Academy of Sciences.

Prof. Catherine Br?chignac (born 1946 in Paris) is a French physicist. She is an Officer of the L?gion d'honneur, President of the International Council for Science and former president of the CNRS ("National Center for Scientific Research"), Europe's largest scientific body.

As a president of the CNRS, she was responsible for 25,000 employees, 12,000 of whom are researchers, and a budget of EUR 2.42 B. She has been the Permanent Secretary of the French Academy of Sciences since 2011.

This is a contract drafted jointly by the academies of sciences of Bulgaria and France that focuses on fields in which we have already worked together.

These include earth sciences, biomedicine, nanotechnology, mathematics and computer science, and archaeological sciences.

These are the priorities fields, which of course does not exclude cooperation in other fields that are not mentioned in the agreement.

What are the benefits for French and the Bulgarian scientists from this cooperation?

We researchers work thanks to good practices, and we have selected these fields for cooperation because our researchers are already working there together.

For example, if we take archaeology, there is long-term cooperation between scientists from Bulgaria and France that is very advanced. They already have joint teams, and the defining of these fields in fact encourages us to support the cooperation that already exists.

It is much better to work that way, in a coordinated fashion, than to provide funding here and there. That is why the existing cooperation is our starting point, and we are now encouraging and supporting that.

So getting together, we first took into account the fields in which we are already cooperating strongly. We synchronized that with the help of the French Embassy in Sofia, which knows the bilateral cooperation in various scientific projects very well, and we started off with these fields. Because it is best to be pragmatic in a period of economic and financial constraints.

Which are the strongest aspects of science in Bulgaria?

Bulgarian scientists are strong in traditional disciplines – all the fields that I mentioned above as part of the agreement plus mathematics and nuclear physics, by tradition I would say.

We are setting off from what we already have. We should do together what we already do best. I don't believe in geniuses that create everything from scratch in a desert. Science is a complex structure, and it is created step by step, not out of the blue.

Do you share the opinion that the EU, Western Europe included, is falling behind the USA and East Asia in terms of scientific research, and especially research and development activities?

No. I don't share this opinion. I think that the Chinese are catching up to us, which is a great thing. But you know the way that works is on the highway building principle. It takes a long time to build a highway but when you build it you're flying on it. Also, if you have to build it on your own, it will take forever.

How have the financial crisis, and the difficulties in the past five years affected scientific research, especially in Europe where the model of funding involves a lot of state and public funding?

How has that been working out?

It hasn't always worked out so well. In France we have both types of funding of science research and development, and it's not perfect; there's no way we can say we've achieved some sort of absolute successes.

However, it is dangerous to have funding for scientific research from the private sector only, and it is stagnating to have state funding only. It's best to combine them.

If we look at the EU level, the former 2010 strategy, the Lisbon Strategy of the EU, which was supposed to encourage research and development, generally failed...

No, it failed completely.

So how do you view the EU-level measures for stimulating scientific research? Is the Europe 2020 Strategy now better?

As far as the Lisbon Strategy was concerned – we all agreed about the goals but not on how to go about achieving them. The Lisbon Strategy demanded that 3% of the GDP be spent on research and development, which is absolutely impossible. We shouldn't be asking for impossible things.

The ambitions of the Europe 2020 Strategy are rather limited. Actually, I think this is not a strategy but a goal, one goal for many things. We all agree on the goals but there is the question of how to achieve them. I don't believe in some overarching authority with fixed rules. Scientists are people who doubt everything, and require great freedom of action. Which is why we don't need this type of rules.

Since we do have a goal, we should let every field find its ways to achieve that, and this goal shouldn't be too long-term because it takes small steps, not long-term theories. We should also keep in mind our context. Europe is multicultural and multilingual. We are not America with its melting pot philosophy, we are not China, and we must use our advantages.

Going back to the Bulgarian scientists – from what you mentioned it seems that they are only strong in fundamental sciences but not in applied sciences?

No, not really. The Bulgarian scientists are also good at IT, nanotechnology, biomedicine, archaeological sciences. These are all applied sciences. You need a guiding light, and you need to advance towards it through practice.

What is your recommendation to scientists in Bulgaria?

I wouldn't recommend to them anything specific. We scientists are in a world of globalization, and we were the first to accept it. Of course, there are individual specifics. But it doesn't matter whether we are French or Bulgarian, we all work the same way when it comes to science.