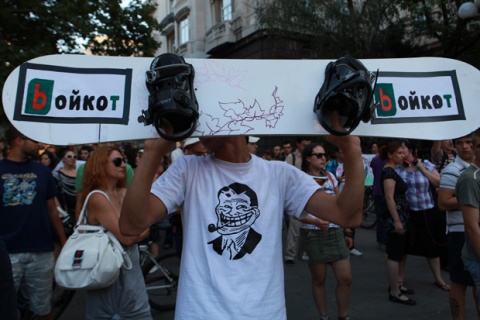 Thousands of citizens have marched every evening since last Wednesday in protests against Bulgaria's amended Forestry Act. Photo by Sofia Photo Agency

The controversial Forestry Act that shook Bulgaria in the last week pertains mainly to the Vitosha mountain and natural park near the capital Sofia, according to an eco activist from WWF Bulgaria.

Speaking for bTV Thursday, Alexander Dunchev from WWF, explained that all other winter resorts in the country are either in protected areas of national parks or on lands that have already been swapped.

Dunchev pointed out that people from Bansko, Razlog, Dobrinishte and mountain towns who have gathered in the capital Sofia to stage a rally in support of the Forestry Act have been misled in thinking the legislation would boast and advance their regions.

"Only the amendment on Vitosha is still in the Act. We oppose new construction there. The plan for managing the mountain near the capital postulates that only repairs and renovations of existing buildings is allowed. If this happens, if existing ski tracks, lifts and other equipment are just modernized, not expanded, everyone will be happy," the eco activist stated.

He further noted that during his meeting with environmentalists even Prime Minister, Boyko Borisov, has supported the idea to replace old ski equipment with new one.

Thousands of Bulgarian eco activists and other citizens opposing the Forestry Act have been staging protest rallies in the area of the key intersection of Orlov Most (Eagles Bridge) in Sofia ever since the Parliament passed the amendments 8 days ago, on June 13.

On Saturday Bulgarian President, Rosen Plevneliev issued a veto on all of its texts.

The counter protests are widely believed to be staged by the ruling Citizens for European Development of Bulgaria GERB party and The "Nature for People and Regions" coalition funded by notorious businessman Tseko Minev. Minev is seen as the person behind the controversial amendment and the one who stopped ski lifts in Vitosha for the entire winter on grounds he was obeying the old texts of the Forestry Act.

Desislava Taneva, GERB Member of the Parliament and Chair of the Parliamentary Agriculture Committee, who was also present for the bTV interview, stated protest rallies must end and be replaced with a constructive dialogue.

She declined commenting on media reports that the management of the winter resort of Pamporovo had issued an order to give free ski lift cards to all ruling politicians and their families.

Taneva said she also learned the above from the media and has never met the CEO of Pamporovo.

"I do not see any logic in this order. I go to Pamporovo every winter for 15 years now and have paid for everything from my own pocket. I know a number of my colleagues, who do the same," the GERB MP explained.