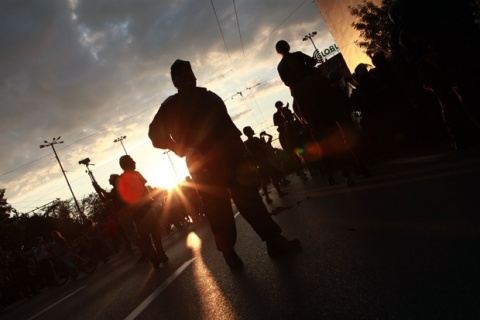 Thousands of Bulgarian nature lovers and other citizens opposing the Forestry Act have been staging protest rallies in the area of the key intersection of Orlov Most (Eagles Bridge) in Sofia ever since Wednesday evening. Photo by Sofia Photo Agency

A new protest is threatening to blockade downtown Sofia for over an hour Tuesday with supporters of the controversial Forestry Act rallying against the veto on it imposed by President Rosen Plevneleiv.

The "Nature for People and Regions" coalition is holding the rally between 12 pm and 1 pm in front of the building of the Parliament under the motto "No to the Environmentalists' Racket!"

The participants will then march to the Council of Ministries building to hand their demands to Prime Minister, Boyko Borisov.

"We will voice our firm disagreement with the veto. We invite all, who realize that for 8 years now not even one investment has happened in Bulgarian forests and mountains because legislation is pushing investors away, to join us," the organizers state in an open letter to the media.

The Forestry Act was passed by the Parliament during the day on Wednesday while on Saturday Bulgarian President, Rosen Pleveneliev issued a veto on all of its texts.

Thousands of Bulgarian nature lovers and other citizens opposing the Forestry Act have been staging protest rallies in the area of the key intersection of Orlov Most (Eagles Bridge) in Sofia ever since Wednesday evening. On Sunday they went to the location to plant flowers after being accused by Interior Minister, Tsvetan Tsvetanov, of destroying the nearby green areas in the central Borisova Gradina park.

The Mayor of Simitli, Apostol Apostolov, declared the Sunday rally illegal, saying the demonstrators were paid to attend, bused to the location, and guarded by police who beat people at other protests.

The negotiations focused on the controversial lawmaking between Bulgarian environmentalists, the business and those in power continue Tuesday, after reaching stalemate one day earlier.