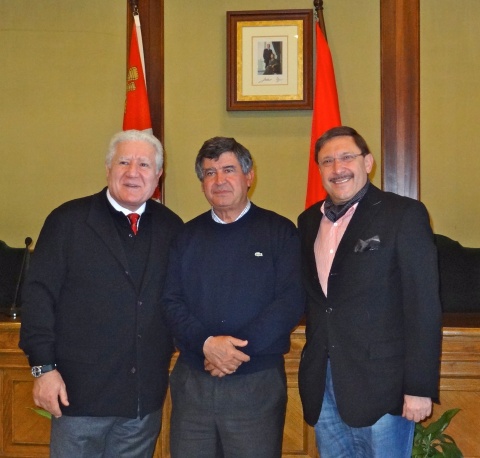 From ABC, Madrid (Translation from Spanish)

The Jewish Museum of Bejar, which this week received a 19th-century Torah from Terrassa (Barcelona), plans to expand its museum space to accommodate the contents of the Jews who were expelled from the town of Salamanca in 1492.

According to the director of the Jewish Museum of Bejar, Antonio Aviles, the Torah was donated by the rabbi of the synagogue of Terrassa.

The Jewish Torah, the five books of the Pentateuch, has had to be restored because it was not in good condition.

After visiting this city, a Jewish descendant, Maxim Behar*, the Honorary Consul of the Republic Seychelles in Bulgaria, committed to purchase a space next to the Jewish Museum of Bejar, which is unique in Castilla y Leon.

In this space, according to the director, a document archive will be created in order to render memory to all the Jews who lived in Bejar and they were expelled.

Bejar is considered the true Jewish district of the province of Salamanca, with a Jewish neighborhood that still exists, although its properties are poorly maintained.

The Jewish Museum of Bejar, founded in 2006, and later run by David Melul (1928-2007) preserves more than one hundred items and documents that deal with the origin and the Jewish presence in Bejar and the rest of Castile and Leon.

The jewel in the museum is a nineteenth-century Torah from the synagogue of Melilla.

In 2008, a Jewish family living in Barcelona donated a parchment of the fifteenth century, referring to a deposit of Jewish money in the city of Calatayud Zaragoza.

That same year, the widow of David Melul, Adelina Macm?as, donated a silver vase and a collection of books in Castilian and Hebrew, entitled "The Voice of Torah."

*Maxim Behar is one of the leading PR experts in Bulgaria. His entire life is connected with public communications. In 1994, he founded the renowned PR company M3 Communications Group, Inc., that he has been running to this very day. Since January 2012, he has been the CEO of office of global PR company Hill+Knowlton Strategies in Prague, the capital of the Czech Republic.

In February 2012, he was one of the participants in the opening debate of "Communication on Top", the World PR Forum in Davos, Switzerland, of which he has been a member of the Board since 2010. Behar is excited by the opportunities created by the modern world of hi-tech and new media. His passion is technological innovations. He is the Honorary Consul of the Republic of Seychelles to Bulgaria.