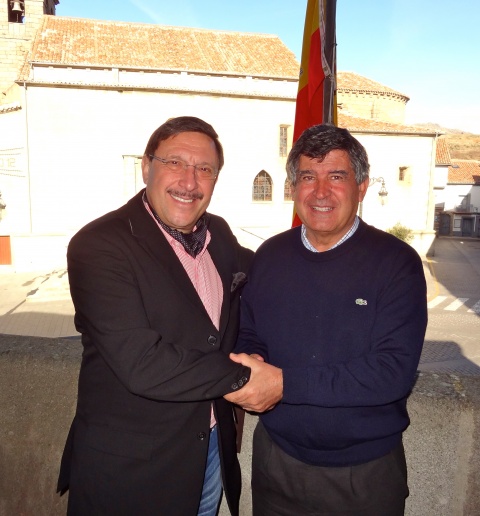 Maxim Behar (left) with Mayor of the Spanish town of Bejar Alejo Rinones in Bejar, Salamanca Province, Spain, in early 2012.

Bulgarian PR expert Maxim Behar, who is also the Honorary Consul of the Republic of Seychelles, will develop a project for a small museum of the Bulgarian Jewish family in the town of Bejar, Salamanca Province.

The project has been announced by Maxim Behar himself after the prominent Spanish daily ABC published an article about his initiative.

At the beginning of 2012 Maxim Behar visited the town of Bejar, and met with representatives of the local authorities led by Bejar Mayor Alejo Rinones. Behar was accompanied by the legend of advertising in Spain, the two times candidate for President of the Barcelona FC, Luis Bassat.

Mayor Rinones presented the town's honorary medal to Maxim Behar, while the Bulgarian himself expressed a desire to purchase a small house in order to turn it into a museum of the Bulgarian Sephardic Jews. Many of them left for Bulgaria from the Province of Salamanca in 1492 AD, and Maxim Behar's forefathers certainly originated from the town of Bejar.

"This visit was among the most memorable ones that I have ever had. The Mayor and I really liked one another, and I am very eager to start my new project – the museum in Bejar. For me, that would be not just an honor, but also an obligation that I hope to carry out in an honorable and professional way," Behar stated.

Behar is one of the co-organizers of the world meeting of Behars from around the globe in the Spanish town with the same name in September 2012.

This is where Maxim Behar truly hopes to meet in person one of the founders of Starbucks, Howard Behar, and the hit CNN talk show host Joy Behar.

*Maxim Behar is one of the leading PR experts in Bulgaria. His entire life is connected with public communications. In 1994, he founded the renowned PR company M3 Communications Group, Inc., that he has been running to this very day. Since January 2012, he has been the CEO of office of global PR company Hill+Knowlton Strategies in Prague, the capital of the Czech Republic.

In February 2012, he was one of the participants in the opening debate of “Communication on Top”, the World PR Forum in Davos, Switzerland, of which he has been a member of the Board since 2010. Behar is excited by the opportunities created by the modern world of hi-tech and new media. His passion is technological innovations. He is the Honorary Consul of the Republic of Seychelles to Bulgaria.